The resilience of a fourth- quarter comeback wasn’t enough for the Northern Michigan football team on Saturday, Nov. 6, as the Wildcats fell to the visiting Saginaw Valley State Cardinals 24-17 in overtime. It was an especially painful loss for the team, as the game was Senior Day for NMU.

Despite the tough emotions associated with the loss, the team has found positives to build on, and, more importantly, to be proud of in the senior’s final game in the Superior Dome.

“I’m really disappointed that we lost this game, but I’m proud of this team,” said defensive tackle DJ Catalano. “We came back and we put in a lot of effort. That was probably the best 3-6 team in the country, and I’m very happy with the way we stepped up to the challenge and stuck together.”

Catalano was one of the 11 seniors who excelled against the Cardinals, as he led the team with 13 tackles and half a sack.

“With this being my last game in the Dome, I just made sure that I played hard,” Catalano said. “I didn’t want to stop.”

The game was a rough ride, emotionally for the ’Cats. After a solid opening return, NMU quickly found themselves in Cardinal territory, but the momentum swiftly turned after a fumble was returned for a 50-yard touchdown return by corner back Ja’Vae Ingraham. After that, the Wildcats had trouble establishing their offense, punting on the next four drives. The team looked to have something going with five minutes left in the half, only to have a missed field goal leave the team without points. After the first half ended, NMU was down 10-0.

In the second half the Wildcats started to have more luck running the Wildcat offense. The widely-known offensive scheme with the same name of Northern’s mascot uses direct snaps to running backs and wide receivers instead of the quarterback to cause confusion in the defense. NFL teams like the Cleveland Browns and Miami Dolphins have run the Wildcat offense with decent success in the last two seasons. While the Wildcat worked for NMU in the second half, it can create some issues in consistency for the team, as five different players took offensive snaps throughout the game.

“It takes a lot of concentration because it’s so difficult,” said center Andy Vasquez. “They’re all different when they shout out the snap count and different in size.”

With the offense working on all cylinders, NMU was able to score 17 unanswered points to tie the game with just three seconds left to force overtime. This was the first overtime game for Northern this season. 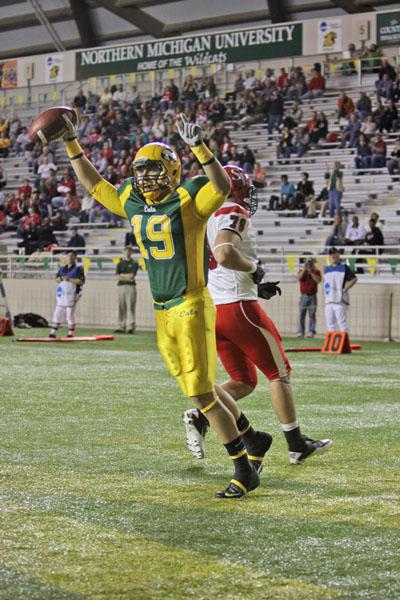 In their first attempt at overtime, Saginaw Valley was able to score a touchdown on a two-yard pass to wide receiver Zach Cecich on a post route over the middle of the field. Due to collegiate overtime rules, the Wildcats then received a chance to score a touchdown as well, but could not score any points. On fourth down from the eight-yard line, tight end Craig Thompson had a crossing route near the goal line, but was shoved from behind by a Cardinal defender. No flag was thrown on the play, and the ’Cats suffered their second straight home loss.

The Wildcats are now at 5-5 with one game left in the regular season against the rival Michigan Tech Huskies. A lot is on the line in this game, as a win would solidify the first back to back winning seasons since 1999-2000 for NMU.

“We have a chance for our second straight winning season,” Leandri said. “One of the reasons why I came here was to help turn this team around and make this a winning program.”

A win for the Huskies would further their cause for a playoff bid, as they are ranked one spot outside of the NCAA Division II playoffs. Also on the line for the teams is the Miner’s Cup, the rivalry trophy shared by the two teams. NMU holds the cup after a 48-16 victory in Houghton last year.

“We’re going to go up there with that cup, and were going to come back with it,” Levy said.