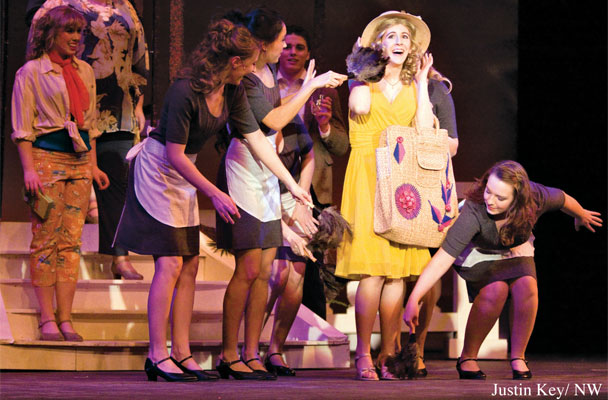 The middle of the semester, with all of its exams and endless homework, seems to be the perfect time to show a comedic musical. “Dirty Rotten Scoundrels” hits the stage this weekend at the Forest Roberts Theatre.

Taken from the movie made in the ‘80s, “Dirty Rotten Scoundrels” centers around the story of two con artists Freddy, played by Aaron Sarka, and Lawrence, played by Bobby Glen Brown, an NMU alumnus. Freddy and Lawrence make a bet to see who can swindle $50,000 first from Christine, a rich American woman vacationing in southern France played by Hannah Irving.

“There are so many twists and turns in the show. I definitely will not spoil the ending for you because it’s a really good one. So, you have to come see it,” said Heidi Hill, a senior communication studies major who plays Sophie, a snobby rich woman.

Hill said the show is basically about rich people being conned out of their money.

“The whole show is just a bunch of laughs,” she said.

Hill, who’s been involved with theater productions since her freshman year of high school, says that she enjoys being in musicals.

“I love musicals,” said Hill. “Singing is my passion and so is theater, so combining those two is a great thing.”

Hill has been involved in “Cinderella” and “Rent,” among other musicals since attending NMU. She’s also been cast in other plays at Northern, starting with “The Importance of Being Earnest” during her freshman year of college.

“Main stage shows, they’re a blast to be a part of. It’s just such a rush to be in a big theater, or the biggest theater we have here on campus. It’s an event,” said Hill.

Hill also mentioned how easy it was to get involved in the theater on campus, even without being a theater major.

“Theater is a great place to just learn how to get in front of people and have fun doing it,” Hill said. “Here, it’s really easy to get involved in the theater program and I encourage a lot of the students to try to do that because we have lab shows. Those shows are directed specifically for students to get involved that may not be theater majors and maybe just want to try it out.”

Meeting new people is one of the best parts of being involved in theater, Hill said, especially the new director of theater, Ansley Valentine.

“He’s a great guy and he definitely knows his stuff,” said Hill.

“Dirty Rotten Scoundrels” is Valentine’s directing debut here at Northern, but he’s been involved in the theater since high school, when he attended a performing arts school. He went on to achieve his MFA in directing from Indiana University, and since then he’s worked with theaters all over the country.

A common practice that helps is to rehearse the play in front of the crew before showing it to the public, and Valentine said the crew loved the musical.

“It takes place in the south of France, so hopefully we’ll make it feel sort of warm and tropical. You’ll be able to forget that it’s snowy and icy outside, and how much homework you have to do for a couple of hours. It is pretty funny, I have to say. We did a crew watch last night, so it was the first time we had other people see it, and they were just cracking up,” Valentine said.

With Valentine’s Day being this past week, Valentine said it would be a good date night. He described the play as dirty, funny, naughty and hopefully perfect for college students.

“That was one of the reasons we did it, because it was so darn funny,” Valentine said. “We didn’t want to do the same old musicals that people have seen 10,000 times. We just thought …this year, let’s try to find something that’s a little different, a little unusual, something that’s not like everything and not like something we’ve done in the past.”

After this weekend, the theater department will get to work right away on their next show, Peter Pan.

“It’s not like a little kid’s version of Peter Pan,” said Valentine. It’s a little dark and a little scary. Hopefully it’s something that will appeal to the college kids. It’ll be different.”