Cagers wrap up at home with 35-point victory

The scoring problem has been solved for the Wildcats, as the women’s basketball team put up triple digits last Thursday, Feb. 17 against the Lake Erie Storm.

“It was just so fun to be out there on the court,” said guard Callie Youngman, who was on the court for the 100th point. “Considering there was times this season where we were struggling to break 40, this is great.” 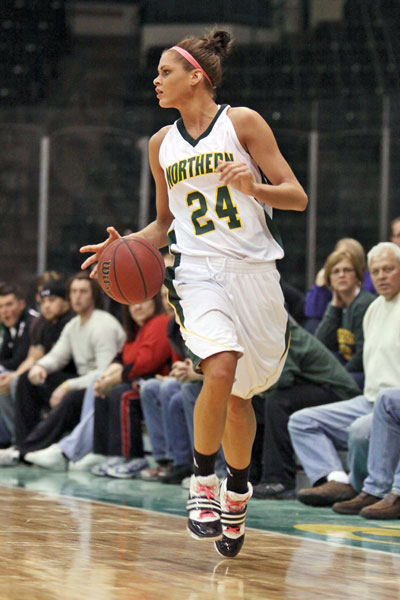 “I thought our top seven players got us off and going,” said head coach Troy Mattson. “Jackie (Davey) and (Erin) Powers did a good job coming out there after (Staci) Beckel got in foul trouble. Our guards went out there too and got the fast break going for us and when we’re playing in transition, we are a really good basketball team.”

Mattson praised his bench players for continuing the solid play in the second half once the top seven players were done for the game. Players like Becker and guard Kelsey Campbell got a lot of playing time in the second half, putting up career-high totals for minutes played.

“Anytime we get the bench in and play in situations is good,” Mattson said. “All these girls are freshmen and anytime we can get them out on the court is good for this program.”

The 107-75 victory was the first time the Wildcats broke 100 since November 2008 against the Finlandia Lions. The previous high for NMU this season was 94, also against the Lions, but the highest in a conference game was 84 against Saginaw Valley on Jan. 13. Scoring has been the biggest problem for the Wildcats all season, averaging just 61.2 ppg and 12th in the 14 team conference and scored fewer than 50 points in five games this season.

The Wildcats kept up the solid scoring effort in Saturday’s 74-66 victory over the Ashland Eagles. Stoeger led Northern with 25 points in her final game at the Berry Events Center, pushing her over the 1,000 career point total with a three pointer in the second half.

“Its cool. I don’t think I would have ever imagined it in college, since I didn’t do it in high school,” Stoeger said. “I’m glad that I can do it in this jersey and represent this school.”

This is the second time this season the Wildcats have taken down a team leading the GLIAC South. NMU beat the Findlay Oilers on the road, 68-55, on Feb. 5. The Eagles were 5-0 against the GLIAC North before the road trip to the U.P., as they also lost to the Michigan Tech Huskies in Houghton on Thursday.

“Ashland has great post players and they’re really aggressive,” Rietveld said. “What we wanted to do was have (Stoeger) double-down in the post and then just play -real -intense, real scrappy and go and get the loose balls.”

The weekend sweep was the first time this year that the Wildcats were able to win both GLIAC games in a week.

“It was pretty awesome,” Stoeger said. “We owe it to our teammates for working hard to go and get the win.”

However the scoring solution came too late for NMU, as the 59-46 victory by Tiffin over Ohio Dominican put out that fire, as the Wildcats were eliminated by the Dragons win.  NMU lost to Tiffin 47-36 over Winter Break and lost the tiebreaker in the process.

The Wildcats will end their season on the road, as they will face the Northwood Timberwolves on Feb. 24 and the Saginaw Valley Cardinals on Feb. 26.