In order to address a $20 billion deficit in the federal Pell grant program and to maintain the maximum award total, President Barack Obama has proposed changes to federal financial aid in his fiscal year (FY) 2012 budget.

The Pell grant is money given annually to students who show financial need and do not need to be paid back.

The president’s FY 2012 budget, which is moving through a lengthy approval process in Congress, will include changes in federal loan programs to pick up the slack and allow Pell grants to maintain a $5,550 per year maximum. 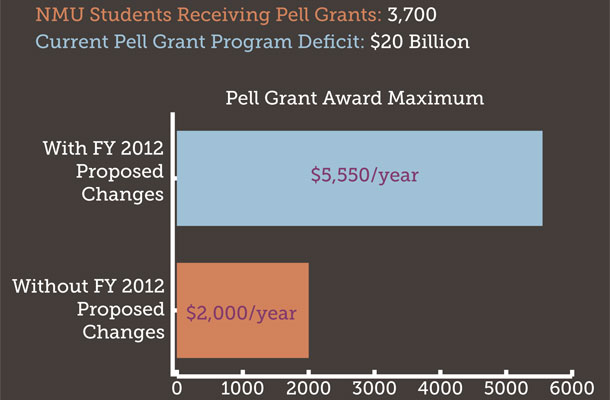 Changes are proposed to both the Stafford loan program, where money is lent directly from the government, and TO the Perkins loan program, in which federal loans are distributed by individual schools to students that demonstrate need. In the case of the Stafford loan proposal, graduate students will no longer be eligible for subsidized loans (loans that do not gain interest while the student is enrolled in school), and will instead be eligible for loans at a 6.8 percent interest rate. The restructured Perkins loan program would require all lenders to pay a raised interest rate of 6.8 percent while still in college. Currently, both Stafford and Perkins loans are available at a 0 percent interest rate while a student attends school.

According to the National Association of Student Financial Aid Administrators (NASFAA), restructuring these two loan programs could generate a total of $8.8 billion in savings that would then be used to maintain funding of the Pell grant. If no action is taken to address the Pell grant’s budget deficit, maximum awards could be reduced by as much as $2,000, the NASFAA said in a letter explaining the changes. Cutting the award amount will do harm to students who are most in need, said Mike Rotundo, director of financial aid at NMU.

“Loss of any financial aid is not good for the student base. To look at a drop in Pell grants really would put up some barriers for students,” he said.

While the loss of some subsidized loans will have an effect on many students, the changes made will strengthen the Pell grant at its current level, and allow students with higher needs a heightened level of access to college, Rotundo said. About 3,700 students at NMU currently receive Pell grants, he said.

Along with changes in government loans, Obama’s proposed budget will also do away with the year-round Pell grant, which allows students to be awarded a second Pell grant within a single award year. NMU was scheduled to implement the policy for the first time in the summer of 2011, but administrators have taken a step back to wait for the final budget to be voted on by congress, Rotundo said.

“We want to make sure before we award students money. We don’t want to over-award and take away dollars,” he said.

One change that has already been implemented to save money is allowing direct transfer of tax information from the IRS to a Free Application for Federal Student Aid (FAFSA). Students who fill out the form online will no longer have to manually transfer tax information, allowing the IRS closer oversight on the FAFSA and cutting down on the amount of improper Pell grant awards through student error.

“(Students who receive loans) are pretty much paying for other kids to go to school. I think that’s kind of unfair,” Seid said.

The changes to financial aid are understandable in the current economic times, but need cannot always be determined appropriately by those giving away the money, he said.

“No matter what happens, there will always be students who fall through the cracks,” Seid said.

To prevent a government shutdown, the deadline for the passage of Obama’s FY 2012 budget, or a continuing resolution to extend the deadline, is Friday, March 18. In a letter released to congress regarding his budget, Obama listed education as an important investment for the future.

“We are on our way to meeting the goal I set when I took office: by 2020, America will once again have the highest proportion of college graduates in the world. To get there, we are making college more affordable for millions of students … (by) maintaining our historic expansion of the Pell grant program while putting it on financial footing,” Obama said.