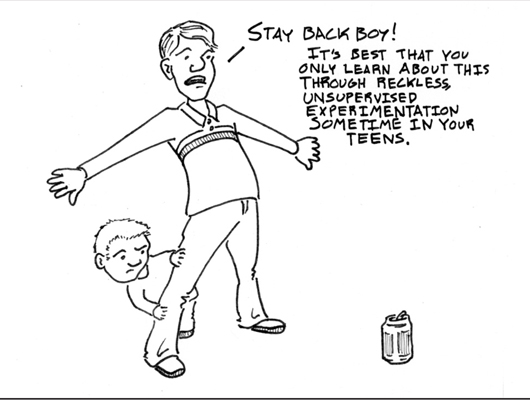 I had hardly been in college for 30 minutes before I shotgunned a beer, did a shot of cheap whiskey and ran sprints down my dorm hallway in my underwear. My first morning in college found me nursing a jack-hammer headache and cleaning the upchuck out of my backpack.

By the grace of whatever god you choose to worship, upon turning 21 I had a record clear of Minor in Possession citations and had managed to learn to drink responsibly. Well, responsibly enough to keep myself out of the hospital at least.

Many of my new college friends were not so lucky. By the time I reached my sophomore year, many of them had been kicked out of school. For some of them, good grades weren’t enough to keep them at NMU; their only crime had been getting caught too many times with alcohol underage.

My example may be extreme, but the fact of the matter is that consuming alcohol has ingrained itself into our culture as American college students. With hefty MIP fines doing little to curve statistics other than drain poor college students of their remaining money, it’s time that we rethink our minimum drinking age requirement.

Many of our parents can remember a time when the legal drinking age was synonymous with legal adulthood. In the 1970s, the argument for a legal drinking age of 18 had its roots in negative outcry against the draft carried out during the Vietnam War. General consensus among many states was that if someone is old enough to die for their country in war, then they’re probably old enough to have a beer. At that time, states were free to regulate drinking as they wished, and many lowered the legal age to 18.

In the 1980s, special interest groups got the better of President Ronald Reagan, and he signed into law the National Minimum Drinking Age Act of 1984, requiring states to set their minimum drinking age at 21. While the constitution still protected a state’s right to control alcohol consumption, the federal government still had ways to enforce the law, mainly by taking away federal highway funds from those states who didn’t comply.

By 1988, South Dakota and Wyoming became the last states to raise their drinking age, solidifying 21 as the drinking age in all 50 states. Originally Reagan opposed the law on the basis that it violated states rights, but increasing negative sentiment among the public helped to sway his opinion. And so it was that President Reagan, the man who stood tall against the apocalyptic threat of communist Russia, cowered at the feet of a new wave prohibition campaign led by groups like Mothers Against Drunk Driving (MADD).

While the new drinking age requirement did arguably serve its purpose, to lower drunk driving casualties, it has had little effect over controlling underage binge drinking, which is quickly becoming a serious problem on college campuses.

Just as there were speakeasies during prohibition, tighter restrictions on alcohol have forced underage drinkers to congregate in secrecy, often in environments where medical help is not readily available.

According to the Center for Disease Control (CDC), 11 percent of all the alcohol consumed in the United States is done so by minors. Of the alcohol consumed, 90 percent is used solely for the purpose of binge drinking, or drinking to get drunk. Michigan’s inability to adopt a medical amnesty policy, a law that allows minors to seek medical attention without getting an MIP, has only increased the danger for students who party in the secluded basements of a stranger’s home.

The drastic rise in binge drinking among underage college students was enough to turn some heads. In 2008, a group of university presidents began the Amethyst Initiative, a movement to lower the drinking age to 18. To date, 136 university presidents have signed on to the initiative. The idea behind lowering the age is not to encourage underage drinking, but to give the opportunity to consume alcohol in a controlled environment.

Whether or not the drinking age is lowered, college students will continue to drink. I don’t need a study by the CDC to tell me that increased pressure on underage drinkers will only force them further underground. One need only walk the streets of Marquette on a Thursday night to see how effective the law is on minors.

Instead of cracking down on underage drinking, we should look at eliminating the taboo that surrounds drinking itself. If we endorse drinking as a part of our culture, it will eliminate the perception that alcohol is criminal, perhaps encouraging more responsible consumption. Is it that outrageous to think that an 18-year-old should be allowed to enjoy a beer with dinner? I’ll drink to that.