The NMU women’s cross country team competed in Northfield, Minn. on Saturday, Sept. 1, at the St. Olaf Invitational. Out of the 16 teams involved in the meet, the Wildcats came out in fourth place.

Head coach Jenny Ryan was happy with how the meet turned out. Out of 325 runners, seven of the ’Cats were among the top 36.

“The team ran very well at the race. We had three women finish in the top 17, and our top seven all finished in the top 36,” Ryan said. “The St. Olaf Invitational was a competitive meet with top Division II and III teams.”

Only 14 NMU athletes competed in the meet last weekend. Among them was freshman Larissa Halonen, who finished the race with a time of 23:16, the fastest out of all the Wildcats. Halonen said that her expectations were exceeded at the Invitational. 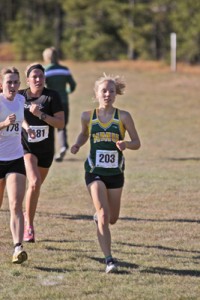 “I expected our team to perform well because we have been training extremely hard all summer and at practice this fall. In the last few races, we all competed with great effort and determination,” Halonen said. “I was excited that NMU competed so well against some very difficult teams. I felt that we earned our place.”

Halonen was within the top three times overall at the meet. Wildcat runner, senior Olivia Juntila finished with a time of 23:58. Juntila said that she met her goal of improving on her performance since the previous race.

“I was just hoping on feeling good during the race, and staying focused, moving up and placing. It went well, not as well as I had hoped, but I’m getting somewhere,” Juntila said.

The cross country team has been training all summer for their competitions this fall, and according to Ryan, the season is going very well.

The athletes were given workouts to train over the summer and are now working on their speed at the races, Ryan said.

“We work on pacing, race strategy and mental training,” Ryan said. “We are still training hard as the races at the end of the season is where we plan to run our best.”

Juntila said that the team gets along great and that the season is going well.

“We have been having a pretty good season, one of the best in a few years. Our team is really strong, and we get along really well. And it’s always fun to come to a practice,” Juntila said.

The Wildcats’ next meet is the Roy Griak Invite on Saturday, Sept. 24 in St. Paul, Minn. This is the largest competition in the country, according to Ryan.

“We’re looking to go there and play high as a team. It will be interesting to see how we stack up against other Division II schools and even Division I as well,” Ryan said.

Juntila said the team is really looking forward to the competition at the Roy Griak Invite as well.

“It’s a lot of fun. It’s a great bonding experience for the whole team. It’s really awesome to see how much excitement is in the sport of cross country; So it should be exciting to see how well we do and how we place among the Division II and Division I women’s cross country,” Juntila said.