Road trips always test a team, and the NMU women’s soccer team just completed a six-game stretch away from home last weekend with a win and a loss.

“We’re really happy we get to come home, and we’re right near the top of the standings,” Granstrand said. “We get to see these same teams again without the travel and on our bigger field.”

The Wildcats are in third place in the GLIAC North and only a game behind Ferris State University for second place. On Sunday, Sept. 25.

The ’Cats ended the road trip with a 4-1 loss against the Northwood University Timberwolves. Granstrand said Northwood finished its opportunities, and that was the difference in the game.

“We played a really good first half,” Granstrand said. “It’s a fluky game; they had shots and finished them, we had shots and didn’t. Credit Northwood for getting it done; we’re a little road weary but that’s not why we lost; they finished, we didn’t.”

NMU got on the board first when senior forward Chelsea Lyons scored her GLIAC leading seventh goal of the season off junior forward Amelia Johnson, third assist of the season. Johnson is tied for third in the GLIAC for assists. 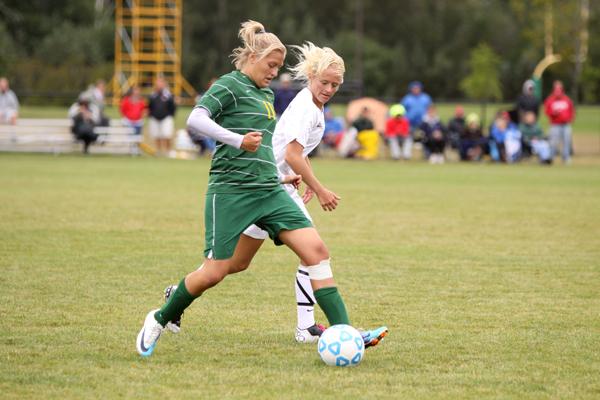 Northwood scored the next four goals and kept the Wildcats off the board to finish with a 4-1 win. Freshman forward Tevun Sellers said the team played well enough to win, but didn’t capitalize on their chances.

“I think we made the game harder than it should’ve been,” Sellers said. “We should’ve won, but they had some great chances on goal and took advantage of them.”

The ’Cats’ first game of the weekend was against the Saginaw Valley State University Cardinals. Despite falling behind early, the Wildcats picked up a 2-1 overtime win.

Saginaw took an early lead by punching in a goal at the 4:59 minute mark. Senior defender Missy Mohr said the goal sparked the ’Cats’ game.

“We started the game really flat,” Mohr said. “We didn’t play well in the first 10 minutes and they took advantage of that and scored. But the goal seemed to light a fire under us and get us to play our game.”

The ’Cats responded at the 29:16 minute with a header from Johnson for her second goal on the season; Lyons picked up her second assist of the season. NMU and Saginaw were unable to break the tie in regulation and the game went into overtime.

This set up the game-winner for Sellers, who was substituted back in the game to start overtime.

Senior defender Aurora Jackson bombed a corner kick and a scramble ensued. The ball popped out toward Sellers who buried it in the left corner for her third goal of the season and the win.

“I thought we played really good that game and deserved the win,” Sellers said. “We all worked super hard and didn’t want to leave that game with a tie.”

Both teams attempted 13 shots on goal, and senior goalkeeper Jessica Baker recorded four saves for the ’Cats. The win marked the third time in a row NMU has beat Saginaw.

The ’Cats have one more weekend on the road this season but play seven of their remaining nine games at home. Granstrand said the team is happy with the split this weekend, but they weren’t accepting of the tie.