It was a tale of two quarters for the Wildcats football team (2-1 GLIAC, 3-1 overall) as they dropped their first game of the season against the Ashland University Eagles.

NMU jumped out to a 13-0 first quarter lead before giving up 31 unanswered points and losing the game 45-16. Head coach Bernie Anderson said Ashland gained momentum and never looked back.

“I thought we played a great first quarter,” Anderson said. “After that the wheel feel off the cart, and from that point on it just snow balled against us and we were never able to recover; and it only got worse.”

One of the turning points in the game was a pivotal turnover on downs at the end of the first quarter. The ’Cats went for the first-down on a fourth-and-one on the Ashland 44-yard line but came up short after a questionable ball placement. The ’Cats had a chance to add to their lead and Anderson said the turnover-on-downs changed the pace of the game.

“The bad spot and the stick marking was the turning point,” Anderson said. “When we didn’t get that first down and turned the ball over that started it. Then they made a couple big plays and got momentum and they become a very good football team at the point.”

Northern got their offense rolling quickly after a fumble from Ashland on the opening kickoff put the ’Cats at the Eagles 38-yard line. Four plays later, senior quarterback Carter Kopach rushed for a four-yard touchdown to put NMU up 7-0 with less than two minutes into the game.

After forcing an Ashland punt, the ’Cats marched downfield and Kopach connected with senior wide receiver Kyle Senn for another touchdown. 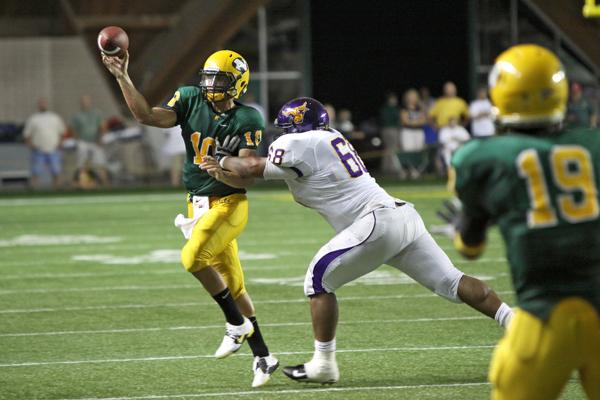 “Its one of those games where one thing happened after another; next thing you know we’re down big,” Douglas said. “When you’re on the road, any little thing becomes a big thing and we tried to bounce back from it but we couldn’t put it together to make a run at them.”

The Eagles put up 17 points in the second quarter to take a 17-13 lead into halftime. The Wildcats got their final score in the third quarter when junior kicker Rockne Belmonte put in a 40-yard bomb. Kopach said that, indivdually, no one is to blame for the loss.

“There are no fingers being pointed at any individuals or coaches,” Kopach said. “Special teams let us down a little bit, offensive obviously let us down and the defense didn’t have their best game. It was just a team loss.”
The Wildcats had 39 rushes for 168 yards and 289 yards of total offense. The offense also lost a fumble and had two interceptions. The Eagles had a big game on the ground with 255 yards rushing on 51 carries.

“We got a great opportunity to play one of the best teams in the league and we got them at home, and we cherish that opportunity.” Anderson said.