Volleyball makes a push with sweep

Head coach Dominic Yoder said he was satisfied with the team’s performance this weekend and praised the team’s ability to succeed, despite their slow start to the season.

“The team really bounced back well; we went on the road and won two matches, which was one of our goals,” Yoder said.

The team played well against LSSU; Yoder said their opponent was scrappy and very competitive in their own facility.

Senior left striker Emma Wolfe said she knows the importance of staying positive, no matter what the circumstance is.

Yoder said the ’Cats have greatly improved from their last matchup with Northwood; last year, the team lost to Northwood 3-0.

“For us to go there and beat Northwood 3-0, I think the level of competition is pretty good,” Yoder said.
Yoder also commented on Northwood’s ability to adjust to the ’Cats’ serve reception in set one.

“In set one, our serve reception was really good and we played pretty well,” Yoder said. “In sets two and three, I think Northwood made some changes to their serving and our serve receive had some struggles in those sets.” 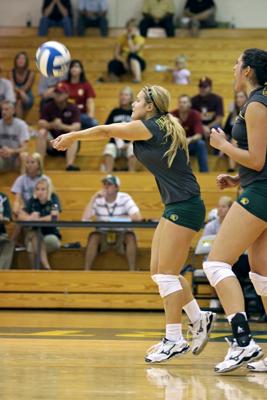 Yoder said energy level is a crucial part of any volleyball match. Last weekend, the ’Cats used their energy level to boost their potential and competitive edge.

“The energy this weekend was really high; we had a hard week of practice” Yoder said. “We trained really hard and they went out and competed really hard.”

Wolfe said the team has been trying to perfect certain aspects all week.

“We’ve really been working on our blocking this week, so I wanted to do well on my blocking,” Wolfe said. “Just being able to hit the shots that I had been working on was great.”

Coach Yoder was impressed with the way his senior leader Wolfe has been playing.

“Emma Wolfe really leads the team through performance. She leads by example,” Yoder said. “She is the number one player in the conference right now in attacks.”

When it comes to the mental side of the game, the ‘Cats use their practice time as a way to condition their minds.

“We mentally prepare for the matches through practice. We require the team to stay really focused and competitive in practice,” Yoder said.

After winning the first match, the team had a difficult time staying in the moment Yoder said.

“The scores in the last two sets were a bit tighter so we let the opponent sneak back into the game and have more success in sets two and three,” Yoder said.

Next weekend the Wildcats will travel north to take on Finlandia University at 7 p.m. on Thursday, Sept. 29 in Hancock. The ’Cats will take on Michigan Tech. at 7 p.m. on Friday, Sept. 30 in Houghton.