NMU’s Homecoming king and queen were crowned during the competition Wednesday night.

Every year the Homecoming King and Queen Competition is held to decide that year’s court. 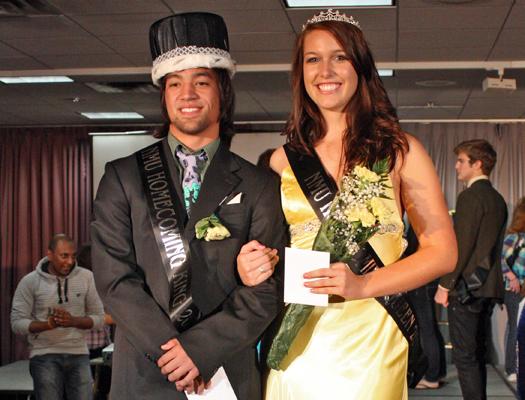 “I wasn’t expecting to win, but it feels really nice to win and help out my hall,” Bohn said.

By being crowned king and queen, Bohn and Hwozdik both got 70 points for their group. To enter in the competition they had to fill out an entry form and go to a mandatory meeting last week.

During the competition participants wore a super hero or villain costume to go with this years Homecoming theme, Heroes and Villains. Part of the competition was to explain why they chose their costume.

Bohn chose to go as the Incredible Hulk because at his first house meeting when he asked his residents what they expected of him one student said he expected Bohn to rip a phone book in half, he said.

“The next day I decided to try it. So I looked it up online (and) there’s a technique to it,” Bohn said. “So I started practicing and when the homecoming competition came up it was Heroes and Villains so they were like ‘why don’t we just put you up as the Hulk and have you tear a phone book in front of everybody.’”

“I chose Buttercup because she was kind of like the tough one that wasn’t afraid or going to back down and just cave under people,” Hwozdik said. “So I think that’s a true leader; doing what you think you need to do and not worrying about everyone else.”

After the costume competition there was a semi-formal wear category before the voting and judging to pick the winners was done.

“I was really surprised (to win) because I was really in it for the fun. I’ve never been to the competition before,” Hwozdik said. “I was just happy to make it to the top five.”

The first runners-up were Jackie Diekman, representing Meyland Hall, and Cody Ross, representing Spooner Hall. They both got 65 points each for their halls.

The second runners-up were Gabby Martin, representing Gant Hall, and Kevin Rush, representing the on campus apartments. They both got 60 points each for their groups.

All participants received 50 points each for their groups just by competing in the competition.

Points were given out to groups that placed in the Dead River Games on Sunday, the Scavenger Hunt on Monday and the Stepping Competition on Tuesday. Points are also given out during the parade for best float, spirit banner and marching unit and for best decorated car.

Homecoming continues with the parade at 5:30 p.m. Friday and the football game against Wayne State University at 4 p.m. Saturday.