Bike program is a good idea, but it needs work 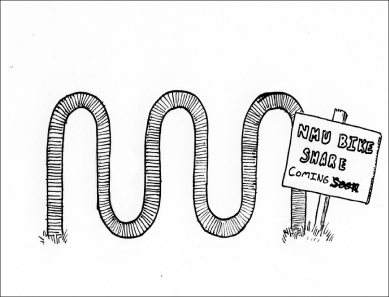 While we at The North Wind are often quick to jump on ASNMU for every little mistake they make, we’ll never lose hope for them as an organization. That being said, it always pains us when a good idea gets pushed aside. Such is the NMU bike-share program, which was abandoned last semester after being years in the works.

The program has recently been revitalized, and with a new ASNMU administration and members, it is possible that this time NMU could be the next university with a fully functioning bike rental program. That is as long as the new administration learns from the mistakes of its forbears and makes some major changes.

In a tremendously bike-friendly city, how could a program like this not catch speed? Part of the answer lies in the daunting amount of manpower it took to keep bicycles maintained and in proper working order. During the program’s running, many of the better bicycles went out of repair and were made unavailable to students. It took a dedicated team of volunteers to repair bikes as they fell out of service, and this kind of commitment was difficult to offer on a strictly volunteer basis.

The main problem the bike-share program faces in the future is exactly what doomed the program from the beginning during the first attempt. Many students were (and still are) unaware that the program even existed. Sometimes posters don’t quite do the job of advertising what they’re supposed to. The hardworking volunteers of the original bike-share program found this out the difficult way.
According to ASNMU, bikes could be ready to check out in as early as a few weeks, but in order to make students aware of the program, ASNMU needs to do more than post information on a wall. They need to get out there and show students how they can become more mobile in the city of Marquette with a simple trip to the library.

With a new budget being approved for the program last week, it looks as if ASNMU has made a solid investment in the program’s success. Most of the budget appears to be going toward maintaining the bicycles, depreciating the advertisement aspect.

The bike-share program is a good idea, but without proper organization, a good idea amounts to little in this world. If ASNMU can stay committed and come up with some good ideas, the program could launch as one of their most successful projects.