The road trips are finally over for the NMU women’s soccer team (5-3-2 GLIAC, 7-3-3 overall). The ’Cats played their eighth and ninth games away from home last weekend and split with a win and a loss.

On Sunday, the Wildcats faced the first place GLIAC south Tiffin University Dragons and got their offense rolling with a 5-2 win.

It was the most goals NMU has scored in a game since 2009. Head coach Matt Granstrand said his team can be dangerous when it plays to its potential.

“The biggest thing on Sunday was we finally played a complete game,” Granstrand said. “We showed up from the second we started the game until it ended.”

“It’s the first time all year that we played a full 90 minutes of soccer and I think the results showed what can happen when we do that.”

The Dragons got on the board first with a quick goal, but the Wildcats wasted little time responding.

Freshman forward Tevun Sellers put in her first goal of the game at the 12:50 mark off the assist from junior midfielder KC McCary. McCary also got in on the scoring action at the 16:23 minute, with an assist from senior defender Missy Mohr. Mohr said it was good to see the offense get rewarded with a big game.

“It felt great to finally get the offense scoring,” Mohr said. “Tiffin is a really good team, so to come out like we did and just attack right off the back was great. It really got the entire team jacked up and wanting to score more goals.”

Freshman midfielder Nicole Musi punched in one more goal, with senior forward Chelsea Lyons adding the assist. Lyons picked up her fourth assist of the season at the 74:26 minute with junior midfielder Brekelle Sellers adding the goal.

Sellers said the team is happy to finally see the ball movement pay off.

“It was amazing to finally be able to put the ball in the net,” Sellers said. “Each goal was well deserved. We played as a team and had great possessions, and when we do that we get the win.” 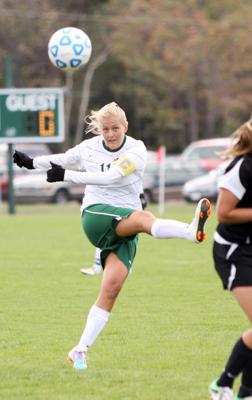 Less than a minute later, (Tevun) Sellers put in her second goal of the game and fifth of the season.

The five unanswered goals fueled the ’Cats past Tiffin, who managed one more goal with six minutes left to play. Granstrand said it helps to have multiple offensive threats.

“We have a lot of offensive players, way more then we can possibly start,” Granstrand said. “They’re all starting to contribute, which opens it up for everyone else.”

NMU’s first game of the weekend was against the University of Findlay Oilers. Northern was unable to find the net and the Oilers picked up the 1-0 victory. Freshman midfielder Nicole Musi said the slow first half start was too much to overcome.

“I was disappointed that we didn’t come out and play like we usually do for games,” Musi said. “We had a difficult and unlucky first half that resulted in the only goal against us. The second half I think we really brought it together; unfortunately it was a little too late by then to get a goal.”

The Wildcats close their regular season out with a five game home-stand.

“Grand Valley and Ferris are both very good, aggressive teams,” Sellers said. “It’s always a battle, but we can beat both teams. We have the talent to do so we just need to take all the chances we get to finish.”