’Cats prove they can play with the best 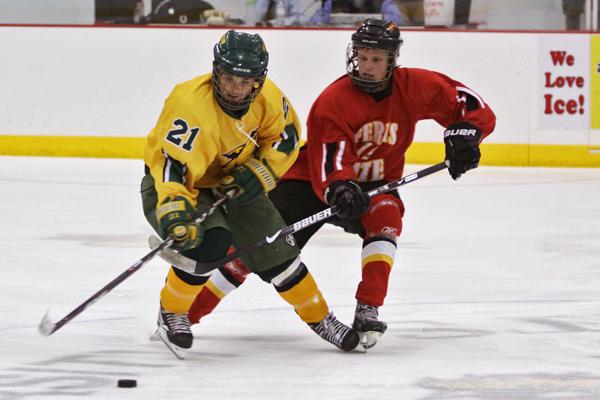 The NMU club hockey team hosted their fourth annual Wildcat Invitational last weekend with teams from around the Midwest and the East Coast traveling to compete.

On Thursday night, the ’Cats beat Rhode Island College 7-3. Early in the first period, senior center Brad Gicopoulos and freshman defenseman Matthew Sullivan each put the puck in the net.

Those two goals were answered by one Rhode Island goal, closing the period out at 2-1 NMU. In the second period, both teams scored twice. Freshman center Tom Castle, freshman center Dillon Montalvo and sophomore right wing Eric Wozny each scored in the third period, leaving the team with a 1-0 tournament record.

Montalvo said he was very excited about getting his first goal of the season and the way his team played.

“It took me longer than expected to get my first goal; they’ll come easier now that I got the first one out of the way,” Montalvo said. “Our forecheck was very good, they couldn’t get the puck out of their own zone and we were all over them in our defensive zone.”

Wozny said NMU stayed focused on playing a new team from the East Coast that had a completely different style of play.

“We came out hard, it was a new team and we didn’t know what to expect,” Wozny said. “We stuck to our systems, moved the puck really well and our conditioning really showed in the third period.”

In the second period, junior right wing Kellen Michalak put three pucks in the net within ten minutes of each other acquiring his first hat trick (three goals in one game) of the season.

Senior and captain right wing Robby Bissett scored the final goal with an assisted from Baudino eight minutes into the final period.

Michalak said while he was happy to get the hat trick, it wasn’t just him responsible for those goals; the whole team deserved the credit.

“To be honest, it’s just another goal. As long as we get the win it doesn’t matter if I score one or six, each goal is a team effort,” Michalak said. “We needed to wake up in the second so that helped motivate the team.”

Freshman goalie Alex Latvala said his defense really played hard for him in the net.

“I had a couple challenging saves but the defense did their job. I didn’t have to make too many saves through traffic, they made my job a whole lot easier,” Latvala said.

The only loss of the tournament came against the Ferris University Bulldogs on Saturday night, ending 3-2. Ferris State beat the national champion runner up Michigan State last weekend and NMU head Coach Carl Trosien said the team was really fired up for this game.

“We had to keep the team grounded all week because all they were talking about was the Ferris game,” Trosien said.

The game started off in favor of the Wildcats after Bissett scored the only goal of the first period; Montalvo scored a late goal to tie up the game at in second period after Ferris had taken their first lead.

A turnover in the NMU zone led to the Bulldogs scoring the game-winning goal with three minutes to go.

Ferris head coach Skyler Chupp said he brought his team up to this tournament to get the best competition and experience they could get.

“There’s good competition here; it’s a really great atmosphere and rink here at NMU. We get a chance to play some great hockey,” Chupp said.

He also commented on the improvement he has seen in the ’Cats since last season.

“Northern is a great team, they have a lot of skill and are lot better than what they were in previous years,” Chupp said. “They have a good core of guys they can build on, good goal tending, and a good coaching staff. They have the potential to be a powerhouse.”

Sunday’s game was to determine the third and fourth place finishers of the tournament between NMU and the Delta College Pioneers. Both teams scored only once in this period; the Wildcat goal came from Bissett one minute into the game.

In the second period, the ’Cats had two unanswered goals scored by Baudino and Bissett. NMU scored four goals in the third period to finish the game strong.

Trosien said after the tournament this weekend, he has high hopes for the upcoming weekend.

“Minnesota are the defending champs; as long as we play like we did against Ferris and Rhode Island and bring the game I know we know how to play, we should be good,” Trosien said.