The lady Wildcats cross country team finished second out of four teams competing in last Friday’s meet. The team was home last week for the U.P. College Championships.
Head coach Jenny Ryan had been hoping to come out ahead of Michigan Tech but felt good about the way some of the girls performed.

“We wanted to beat Tech,” Ryan said. “A few girls had a really good race and a few didn’t do as well as I had hoped they would, especially being at home.”

The cross country team had a great race two weeks ago, according to Ryan. She said that the past two weeks were restful for the team.

“We had recovery time and didn’t work as hard as we had been before the meet a few weeks ago,” Ryan said. “But then it seemed like the team was moving a little slower, so we’ll be training a little harder in the next couple weeks.” 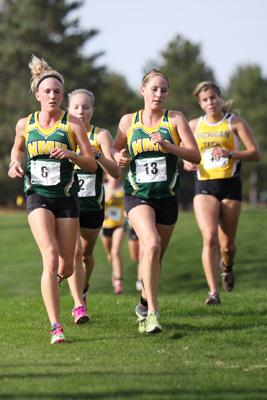 Freshman Chelsea Farquhar finished first for the Wildcats and fourth overall in the race. Her time was 23:49, her best this season.

“I ran the best race of the season,” Farquhar said. “I was finally feeling healthy and really got to see what I could do. I was extremely happy with my race and I’m excited to see what I can do at conference.”

Freshman Larissa Halonen finished fifth overall and second for NMU with a time of 23:52.9.

She said that she was unhappy with her individual result but that the meet was successful in other ways.

“Individually, I did not perform as well as I had hoped to,” Halonen said.

Halonen said she was impressed with the team and the efforts they put forth even though they did not place first.

“As a team, we did not come out on top, but I am proud of all my teammates for the great effort put out in the course,” Halonen said.

The Wildcats only home meet had fans in attendance last weekend. The support was really encouraging for the team, Halonen said.

“Thanks to everyone who came and cheered us on. We greatly appreciated it,” Halonen said.

The cross country team has two weeks of training before their next meet. The training is going to be more intense, Halonen said.

“In order to prepare for the upcoming races, we will follow coach Jenny’s game plan,” Halonen said. “She is going to push us this week with some tough interval workouts, and we are more than ready for them.”

Farquhar’s hopes for the next meet are to continue to improve. She also wants the team to perform to their full potential.

“My personal goals for the next two meets are to maintain my position within the pack,” Farquhar said.

The team has two more meets this season, the GLIAC Championship and the NCAA regional.

Ryan said she hopes to see the team improve and run their best times in these two events.

“I want to see the girls really push themselves,” Ryan said. “I hope to see the best times of the season coming up in the next two meets. I am confident in the team and I know they have the ability to do really well the rest of the season.”

The Wildcats’ next meet is the GLIAC Championships on Saturday, Oct. 22 in Ashland, Ohio. Time is to be announced.