The NMU hockey team took to the ice for its season opener in Wisconsin last weekend, splitting against the University of Wisconsin-Madison Badgers. The Wildcats won 3-2 in overtime on Friday, Oct. 7 and lost 2-3 on Saturday, Oct. 8.

Although the team was disappointed about Saturday’s loss, head coach Walt Kyle said he was happy with the quality of play throughout the weekend.

I thought we got better as the weekend went, which I really liked,” Kyle said. “We started executing better and grasping the concepts we think are important.”

In both the Friday and Saturday games, the ’Cats took an early 2-0 lead. On Friday, the first goal was scored by junior forward Kory Kaunisto just 51 seconds into the second period, assisted by junior forward Matt Thurber and sophomore defenseman Wade Epp.

Senior forward Justin Florek buried a goal at 18:33 in the same period to secure the Wildcat lead, with assists from freshman forward Dylan Walchuk and junior defenseman Kyle Follmer.

With attendance at the Kohl Center in Madison around 10,000 both nights, this quick lead helped NMU take the building out of it, Kyle said. The Badgers, however, were able to tie up the game in the third period both nights.

“I really liked our resilience after Wisconsin caught up to NMU’s lead,” Kyle said. “It’s really easy to fold up, but I was pretty impressed by our character.”

Although Wisconsin was able to secure the Saturday win with a third goal with four minutes remaining, NMU defeated the Badgers with just three seconds left in the five-minute overtime on Friday.

“We were up 2-0 so it’s terrible that we let them back in the game like that, but for Reed Seckel to get the goal, it lifted the team right up,” Florek said.

Kyle said Seckel surprised him with his strong play so early in the season after having most of last year off.

“It felt great,” Seckel said. “What better way to happen than in overtime in the first game of the season.” 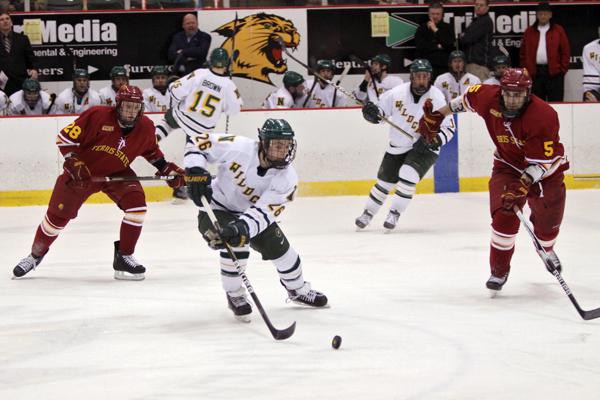 “Reid and Jared, they’re both really great goalies,” Florek said. “I think the whole team trusts whoever we put in net. When you’re across the rink playing offense and defense, it’s a really good feeling to have a great goalie to make the big saves for us.”

Similar to Friday, Florek was a big contributor in goal scoring, putting in the first two of the game on a power play. His first goal was assisted by senior forward Tyler Gron and Follmer and the second by Walchuk.

“I thought Florek was the best player on the ice for either team, both nights,” Kyle said. “I thought he was just outstanding.”

Penalties were the limiting factor against the Badgers last weekend, with 11 on Friday and nine on Saturday. Kyle said that it was the one disappointing part of the Wildcats’ play.

Kyle said the team has not been taking retaliation penalties, but discipline needs improvement.

“We have to know there are certain things you can do, and there are times where you don’t need to reach out and get a stick on people or hold someone,” Kyle said. “They hear it from me daily.”

Besides winning, Seckel said he is looking forward to having fans and students in the building to help create a good atmosphere for playing and watching.

“It’s a great feeling coming out and seeing everyone in green and gold,” Florek said.