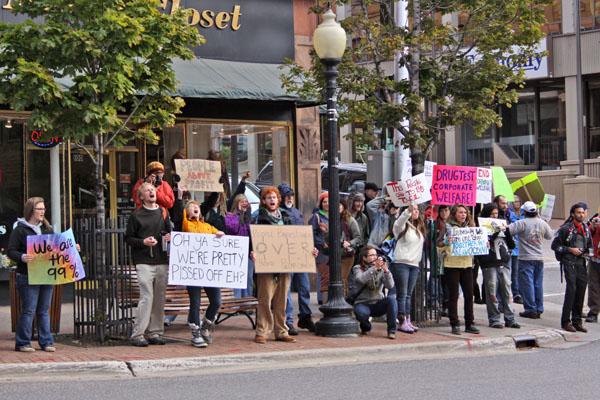 Nearly 200 protesters packed into downtown Marquette on Saturday, Oct. 15, demonstrating in solidarity with the Occupy Wall Street movement in New York and other “occupy” movements around the world.

The event was organized by NMU students and alumni in order to bring attention to the lack of accountability by large corporations in light of the recent economic crisis in the United States, said NMU alumni Chris Paulus.

“Blind consumerism has only contributed to the problem,” Paulus said. “We chose the name ‘Occupy the U.P.’ to demonstrate solidarity with the protesters in New York.”

The event took less than a week to plan, and quickly gained momentum following an appearance by Paulus at the Marquette city council meeting and coverage by local news sources.

Many of the protesters were NMU students, but support by the community has been overwhelmingly positive as well, Paulus said.

“A lot of older people were there because they’ve had full time pensions taken away recently. They may also have been effected by the mortgage fallout,” he said.

The Occupy the U.P. protesters marched from Harlow Park at 10 a.m., making stops in front of the United States Postal Service building and the Wells Fargo branch on Washington Street.

There, protesters were invited to climb on to a wooden box, called the soapbox, and speak freely to the multitude of protesters.

Speakers ranged from a man with leukemia speaking out against an unfair health care system to students speaking about the importance of riding bicycles instead of driving cars.

One of the major goals of the protest was to encourage students and community members to withdraw their money from Wells Fargo, one of the banks that accepted bailout money from the federal government.

“Most students realistically don’t have much in the bank,” Paulus said. “It was really more of a symbolic move.”

Not as many students withdrew their funds as expected, he said, but many claimed they planned to do it in the near future.

Jordan Buzzy, a senior photography major, was one of the students who withdrew all his funds from Wells Fargo. Buzzy has been a Wells Fargo customer since it replaced TCF on campus in 2010.

“Becoming a customer at Wells Fargo was a convenience thing, but there are better banks that I could invest in. In the end, it was about defeating my own apathy,” Buzzy said.

The fact that Wells Fargo accepted bailout money from the government was a major factor in Buzzy’s decision. Supporting local banks is more important than supporting the five Wells Fargo branches in the area, a number Buzzy said is much too high.

Although Buzzy is opposed to Wells Fargo business practices, he said the employees were very courteous during the protest.

“When I went in, the mood and attitude was very polite. One of the tellers even said I should grab some hot chocolate on the way out,” he said.

During the protest, Wells Fargo employees declined to comment. Peggy Gunn, a media relations employee for Wells Fargo, made this press statement.

“We will always respect the rights of Americans to peacefully assemble, and we also hear and understand the concerns this movement is raising,” Gunn said. “We understand Americans are demanding more from their financial institutions during these difficult economic times, and we are listening to what our customers are saying,”

Another march is scheduled to begin Saturday at 10 a.m. at Harlow Park on Washington Street. While Both Paulus and Buzzy consider their first Occupy the UP march a success, they are hoping for even more participation in the second event.

“The world is run by those who show up,” Buzzy said. “And Occupy the U.P. is formed by those people that showed up.