Even after injuries depleted their roster, including starting players, the NMU men’s club hockey team had a successful weekend against Minnesota State Mankato University.

NMU split the series against Mankato last season and came into last weekend’s games with a 2-2 record.

The first game on Friday night ended with a final score of 4-4, followed by a 7-4 NMU victory for on Saturday night.

With a tie and a win, the Wildcats added three of the four possible points towards the WCCHA standings, putting them two points ahead of the second-ranked St. Cloud State University.

Head coach Carl Trosien said Friday’s game was a fluke and that the team played very well; Mankato was just getting lucky bounces.

“We played the best game we played since our only loss so far this season to Ferris,” Trosien said. “The whole game we fought for our chances but they got almost all of their goals off lucky rebounds.”

The Wildcat’s bench was shortened and lines were switched up for Saturday’s game because of injuries to four regular players from Friday’s game.

Trosien said that even with a lot of starters injured, the team still stepped up and played an inspiring game on Saturday.

“There were a few vets and a lot of freshmen in the second game,” Trosien said. “I needed the freshmen to step up, and they did; they were able to shine when the team was in a crunch.”

Freshman center Cory Acker said his line stepped up and was able to show the team what they could do when given more ice time.

“We played a lot better the second game than the first; my line got out there a lot more and we found our rhythm,” Acker said. 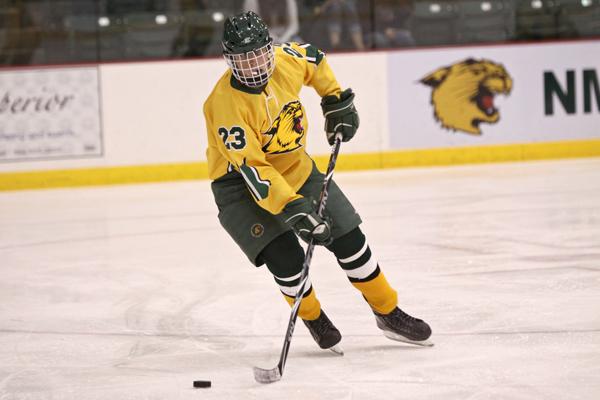 Junior right wing Kellen Michalak played a major role in the ’Cats’ winning weekend, getting a hat trick both nights and an assist on Saturday night.

He said that game one should have been a win, but the team just never found themselves in an advantage situation.

“We dominated a lot of the first game just couldn’t pull ahead,” Michalak said. “There were a lot of odd man rushes coming into our zone, and bus legs from a nine hour drive didn’t help.”

Michalak said, while penalties kept game one even, they helped the ’Cats to a victory in the second game.

“In game two we scored a lot of power play goals; two of mine were on the power play,” Michalak said. “We basically led the entire game and they had a lot of penalties we were able to capitalize on.”

Freshman defenseman Dillon Montalvo said the ’Cats’ hockey game was on point on Saturday even though they let a few goals in.

“During our power plays they couldn’t even hang with us; they didn’t even touch the puck,” Montalvo said. “When we ran our forecheck in the offensive zone, they coughed the puck up to us every time.”

Friday night’s goalie freshman Sam Bouwens, let in four goals on 35 shots. Bouwens said the team is clicking and ready for some of the harder teams coming up in their schedule.

“We are starting to pull away; we are setting up a lot more chances to score,” Bouwens said.