Ghostbusters aren’t afraid of no ghosts, but Marquette residents just might be.

Redbox named America’s “horror hot spots” and “scaredy-cat cities” based on the percentage of horror movies rented per kiosk in 2011. Marquette topped the list of most scared city in 2011.

Senior Chelsea McCallum, a clinical laboratory science major, said she hates scary movies but still finds it interesting that Marquette was labeled as the most scared city.

“My roommates have to pull my teeth to watch a scary movie,” McCallum said.

According to the Redbox Spooktacular Survey, a national survey that polled more then 900 Redbox customers, nearly 75 percent of Americans plan to celebrate Halloween with a horror movie. 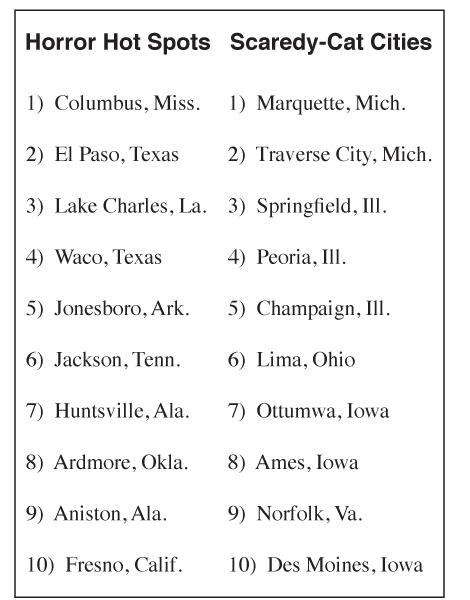 McCallum, however, will not and said her favorite types of movies are comedies or romantic comedies but she was surprised that Marquette is the top scaredy-cat city.

“I would think that it would be the opposite because of all the hauntings in the Marquette,” McCallum said. “Everyone is always like, ‘Wooo, lets go to the orphanage.’”

The national survey asked questions such as, “Is it scarier to watch a scary movie in the dark?”

Nine out of 10 believed that it was and more than 20 percent said they are too scared to turn out the lights.

It also asked what the top villains were and about 34 percent said demons or Satan were the scariest movie villains.

“Creep kids” came in second with 19.8 percent and unsuspected killers like those in “Scream,” “Saw” and “Hostel” with 18.4 percent.

Another question that was asked was what the scariest movies of all time were.

“The Exorcist” ranks as top overall for a scream with 31.2 percent, followed by “A Nightmare on Elm Street” with 12 percent.

“Paranormal Activity” was voted that it generates the most shrieks of newly released horror movies with 34.3 percent and ranked fourth in the overall scariest movie category with 9.6 percent.

There are two Redbox locations in Marquette: inside Wal-Mart and outside Super One Foods.

Marquette residents might not like horror movies, but maybe they prefer the real thing. With all the hauntings in Marquette they have plenty to choose from.