Their wins on both Friday, Oct. 28 and Saturday, Oct. 29 helped the ’Cats reserve their spot in the GLIAC conference tournament.

Head coach Dominic Yoder said the team played well and he was impressed with their ability to knock out two tough teams and enter the conference tournament.

“The team was very prepared and the performance was acceptable, but it will need to improve for this weekend,” Yoder said.

Sophomore left side/middle hitter Kalli Herron said she was also satisfied with the team’s performance last weekend and was proud of her teammates ability to work together to get the job done.

“Overall last weekend we had strong serve receive, which led to great passing,” Herron said. “All the sets were there, which helped out all the hitters as well.”

Yoder said some major things the team will need to work on this week are executions of game plan along with motivation and drive. 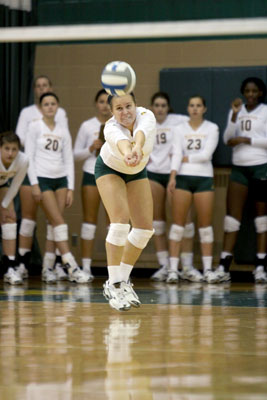 “The team’s energy last weekend was adequate,” Yoder said. “We will need to improve against Wayne State University, University of Findlay and Hillsdale College this weekend.”

Yoder said the defense did their job well, but the weekend was propelled primarily by their attack.

“The weekend was mostly driven by offensive play, but our defense and serving kept the opponent out of system to help our offense,” Yoder said.

Yoder said the weekend was lead by several individuals who performed at the top of their game; notably, junior middle hitter Sami Vierk, junior setter Abby Lovell and Herron.

Herron said she was very excited about her achievement last weekend.

“Knowing I got my career high last weekend is a great feeling,” Herron said. “I started off the season kind of slow, but it’s great to know that I have progressed to where I am now. It’s really a great feeling.”

Yoder said the competition last weekend was tough and the Wildcats had to play hard to defeat their opponents.

“Both teams were good,” Yoder said. “NU was fighting to take our spot in the conference seeding third round, but we were able to hold them off. We need to continue this for the weekend.”

Yoder said the team will need to work on a few things before they face the competition in the coming weekend.

Herron said she is excited about the Wildcat’s upcoming participation in the GLIAC conference tournament.

“I am very excited for the conference tournament,” Herron said. “I think there are going to be some very good competitive games and I am looking forward to it.”

This weekend the ’Cats will be playing three matches at home as a part of the Pink Experience.

Starting with Wayne State at 5 p.m. on Friday, Nov. 4. The weekend will continue with a match against Findlay at 4 p.m. on Saturday, Nov. 5 and 2 p.m. Sunday, Nov. 6. All three games will be at Vandament Arena.