“It wasn’t a lack of effort,” said head coach Walt Kyle. “But we did some things that allowed a team to come out and steamroll us early.”

Losing the lead in the first period both nights hurt Northern, Kyle said. On Friday, the ’Cats came within one point of Western before an empty-net goal and tied the game on Saturday to send it into overtime.

“The thing this team continues to show is a real resiliency and a never-quit attitude,” Kyle said. “I think that’s a great quality of the team, and I’m really proud of the guys for that part of their performance.”

Senior goaltender Reid Ellingson played over 100 minutes in net last weekend, with 29 saves on Friday and 23 on Saturday. Kyle made the decision to pull sophomore goaltender Jared Coreau on Saturday after letting in two shots in the first 10 minutes. 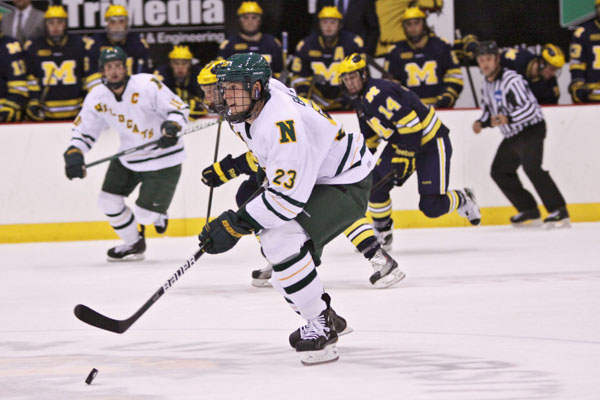 “I didn’t want that lead to turn into 3-0, so I had to do something to shake it up,” Kyle said. “We needed something to keep us in it so we could make an effort to come back.”

Kyle said the standout players of the weekend were Ellingson and sophomore center Stephan Vigier, who scored all four Wildcat goals of the series.

“It’s too bad we couldn’t come out with the win, but scoring is always a good feeling,” Vigier said.

“We’ve got to have a better start, and we’ve got to generate more chances in the offensive zone,” Vigier said. “That’s something we took away from the Western series.”

Notre Dame has strong individual talent and coaching, Kyle said. He expects it to be a great, hard-fought series.

Saturday’s game is part of the Pink Experience, a fundraiser for the Marquette General Cancer Center. The Wildcats will wear pink jerseys, which will be auctioned after the game.

There will also be a silent auction for an autographed pink hockey stick, and pink towels and wristbands will be sold for $1 each.

“Hopefully the crowd comes out like they did against Michigan,” Vigier said. “That was the best I’ve ever seen the Berry (Events Center), and another sellout would be unbelievable.”

Kyle said, as a cancer survivor, he thinks people going through cancer and the treatments involved need all the help they can get.

“I think it’s a great opportunity to teach our players about giving back to the community and doing things for people at a time that they need it,” Kyle said.

The Wildcats take on the Notre Dame Fighting Irish on Friday, Nov. 4 and Saturday, Nov. 5 at the Berry Events Center. The puck will drop at 7:30 p.m. both nights.