Big or small, influenza strikes all

I’ve always considered myself to be pretty tough. Maybe I don’t chew glass or wrestle with rhinos, but as far as your typical college kid goes, I can take a beating.

Sleep? Totally optional. A healthy diet? No way. Weekend-long drinking benders? Bring it on –– I’ll give Ozzy a run for his money. So when my girlfriend suggested I get a flu shot this fall, I didn’t think twice about it. If I’m not afraid of lions, tigers or bears, why on earth should I be afraid of something I can’t even see? Mother nature, I’m not scared of you.

Mother Nature, as she is apt to do, looked upon my precariously balanced schedule this semester and laughed. I had dared to insult her, and now it was time for me to pay the penalty. Remember that college tough guy? The one who could drink Keith Moon under the table? Well now he’s curled up in bed, sniveling through boxes of tissues. Influenza, as it turns out, takes no prisoners.

The influenza virus, commonly known as the flu, affects millions yearly, and complications from it, though rare, can result in death. As college students, we are in constant contact with thousands of germ-infested students on campus every day. So please, for the love of my sickly decrepit body, get a flu vaccine.

One of the many misconceptions about the flu vaccine is that only those who are at a higher risk should get one. Prior to 2009, the common opinion of most medical professionals was that only the extremely old, the young and those with chronic ailments (asthma, heart disease, etc.) needed a flu vaccine.

After the H1N1 pandemic of 2009, the Center for Disease Control (CDC) broadened it’s recommendation to include pretty much everyone. The idea behind this policy shift was that the fewer amount of people who were subjected to the flu would reduce the risk of it spreading to high-risk persons.

Another paranoid delusion of many is that the flu vaccine can actually cause an otherwise healthy person to get the flu. A vaccine works by introducing an insignificant amount of the virus into the body’s immune system, causing antibodies to adapt and fight off a particular virus. According to the CDC, the flu vaccine shot introduces a “killed” or inactive version of the virus to accomplish its goal. Because the virus is already dead, it is impossible to get the flu from the vaccine shot. 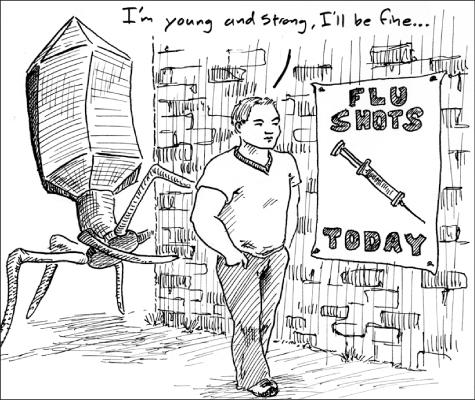 The option to receive a flu vaccination via a nasal spray is also available to most. This vaccination option works slightly differently, by introducing a weakened flu virus as opposed to a fully dead version. The side effects to the nasal spray (while rare) include many flu-like symptoms, such as headache, sore throat and coughing.

Unfortunately, getting the flu shot doesn’t give you 100 percent protection from getting sick. The vaccination only protects against certain strains of influenza that scientists predict will be active in a particular flu season. The common cold can still cause flu-like symptoms even in those who were vaccinated.

But this doesn’t mean that those who are vaccinated can’t still come down with the flu. According to a recent study published by The Lancet Infections Diseases medical journal, the current efficacy of the vaccine is 59 percent in adults 18 to 65. While many medical professionals agree a better vaccine is needed, the best defense against the flu is still to get the shot. Students can receive flu shots on a walk-in basis at the Vielmetti Health Center on campus for $25.

The 2011-2012 flu shot protects against three strains of influenza, one of them being the dreaded H1N1 virus. Many of us at NMU can still remember horror stories of those quarantined for weeks in their dorm rooms back in 2009.

One of the major concerns of health officials has always been that of the emergence of a “super virus”; you know, the world-ending kind. At the onset of the H1N1 pandemic, many health experts thought that this strain of the flu could evolve and achieve a magnitude close to that of the “Black Plague” during the middle ages. Thankfully, a worldwide crisis of similar magnitude was averted, but we need to do all we can to prevent it from happening again.

There is no surefire way to prevent getting sick. I must grudgingly admit that germs are everywhere around us. The only completely reliable defense we have against an illness is to try to reduce our exposure. This means covering your mouth when you cough, washing your hands frequently and refraining from licking doorknobs (it was a dare, I swear).

While I haven’t quite turned into a hypochondriac, I’ve come a lot closer to respecting the limitations of my own body. Instead of ingesting cold medicine and braving a sickly Halloween bar crawl, next year I’ll be prepared. This tough guy is getting his flu shot, and bringing as many as possible with him.