’Cats ranked for the first time in two years

The first rankings for the ACHA Central Region came out last weekend and for the first time in two seasons, the NMU men’s club hockey team is ranked in the top 15 teams in the region.

The lower the amount of points a team receives from the ranking committee, the higher they will be placed. Eight members make up the committee and get to vote on the top 15 teams in each region.

The Wildcats played the University of Michigan, who is currently ranked 10th in the region. The first game on Friday in Ann Arbor was an 8-4 loss for the ’Cats. Freshman center Tom Castle said the team simply had a weak first period.

“They just got going on us and scored about five in the first period,” Castle said. “We had bus legs and weren’t playing to our full potential.”

This proved to be too great a deficit for the team to overcome in the end, but Castle said they still played hard
“It was the first that killed us,” Castle said. “We won the second and third periods because we played to our potential.”

Head coach Carl Trosien said that University of Michigan is a very talented team, and he is proud that the Wildcats showed resiliency and were able to skate with them the last two periods.

“They are a very good team, probably the best team we have seen this year,” Trosien said. “We played a good last 40 minutes against a great team the first night.”

The second game, the Wildcats fought back after being down early only to lose 5-2 after University of Michigan added an empty net goal late.

Trosien said that the team played a lot better in Saturday’s game.

“I thought the team’s work ethic got better and they played an all around good game,” Trosien said. 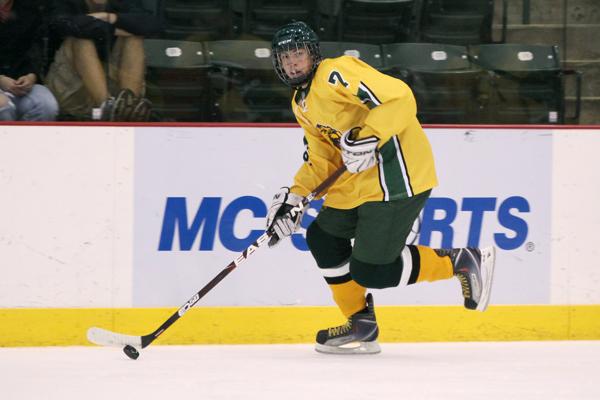 Trosien said Michigan was able to take advantage of Wildcat errors throughout the first period faster than the ’Cats could fix them.

“When we make a mistake against a team like Michigan, you are going end up with a puck in your net,” Trosien said.

Senior left wing Robby Bissett said that initially the team may have been intimidated by the University of Michigan’s reputation.

“Michigan is a good team and a hockey school with a lot of history and good talent,” Bissett said. “The team was in awe and watching the game instead of playing our systems with confidence.”

Bissett said the team was able to snap out of being mesmerized and skate hard with Michigan after that.
“After the first period in the first game, we played them tough and kept it close in the second game,” Bissett said. “If we play our style and do what we need to do, we can skate with any team.”

Senior center Brad Gicopoulos scored one goal each night. Bissett also put the puck in the net once on Saturday night.

This weekend, the team will play St. Norbert’s College out of Green Bay, Wis. St. Norbert’s is coming into the weekend with a 4-4 season record. The Wildcats have an 11-5 record. Trosien said he isn’t worried about the series this weekend.

“To be honest, the last four games we were beating ourselves and making mental mistakes, getting sloppy and playing away from our systems,” Trosien said. “As long as we stick to our systems it should be a good weekend.”