The road has been challenging for the NMU football team this season. The ’Cats dropped their final away game 48-26 last Saturday against the Saginaw Valley State Cardinals to run their road record to 1-3 this season.

The ’Cats (3-6 GLIAC, 4-6 overall) outscored the Cardinals in the second half but were unable to overcome a huge Saginaw second quarter. Sophomore running back Nick Awrey said he was impressed with the team’s fight.

“Not one time during the game did we give up,” Awrey said. “From the first kickoff until the games end we fought hard, it just wasn’t in the cards for us on Saturday.”

Saginaw jumped on the ’Cats early, connecting on a 22-yard field goal and returning an interception for a touchdown in the first quarter. Sophomore kicker Rockne Belmonte connected on field goals of 40 and 21 yards to give the ’Cats their lone points of the quarter. 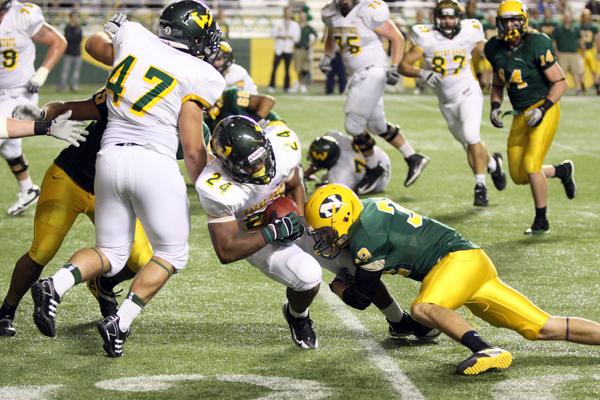 Head coach Bernie Anderson said the team dug themselves a hole early and were never able to recover.

“We scored points with field goals, we didn’t get in the end-zone and we gave up passes that put them in the end zone. That seemed to be the difference in the game,” Anderson said.

The Cardinals offense came out firing in the second quarter as they put up 24 points and held NMU to a field goal. Northern was limited to only three of 13 third down conversions. Anderson said the inability to keep the drive alive has slowed the offense.

“That hurts you; that will be a point of emphasis this week,” Anderson said. “We haven’t been able to cash in on those conversions and that’s a concern right now.”

Northern scored its first touchdown of the game after recovering a fumble off a punt at the Saginaw 27-yard line.

On the ground the ’Cats were paced by junior running back Prince Young who picked up his fourth 100 yard rushing game of the season with 124 yards on 27 carries.

“He’s been in a groove lately. He’s running the ball hard and running it north,” Anderson said.

The Wildcats running game has improved throughout the season and the team has gone over the 100-yard mark in every game since Wayne State. Awrey said the credit goes to the guys up front.

“The biggest key to the running game opening up is the offensive line,” Awrey said. “These guys are the hardest working group I have ever seen and Coach (Rob) Boss has done a great job gelling them together.”

Kopach finished the game 16-32 with two interceptions and a touchdown. He also ran for another score.

Freshman wide-receiver Julian Gaines paced the wide-outs, catching five passes for 92 yards. Awrey said the offense is working on putting it all together.

“Going into next week, we really just need to focus on consistency,” Awrey said. “I truly believe we can be the best offense in the country when everything is clicking.”

On defense, NMU was lead by sophomore defensive back Brandon Parson who recorded seven tackles. Senior linebacker Demetri Stewart added six tackles and a sack to round out the defensive effort.

The ’Cats play their final game of the year as they host Michigan Tech (5-4 GLIAC, 6-4 overall) this weekend.

Kickoff is set for 1 p.m. Saturday, Nov. 12 in the Superior Dome. NMU will look to take back the Miners Cup from the Huskies after losing 12-0 last season. Anderson said playing Tech gives the team motivation.

“Anytime you play against an arch rival you throw your records out and you should be able to get ready,” Anderson said. “It’s important for the seniors, being their last game, to try and leave on a winning note.”