’Cats prevail both nights in the shootout

Two hard-fought tie games against Notre Dame (3-1-2-0 CCHA, 5-2-2 overall) boiled down to a shooter and a goalie in front of a packed Berry Events Center.

“I thought we played pretty well,” said head coach Walt Kyle. “One of the things we talked about was having a ‘bend but don’t break’ mentality and I thought we did a really good job at that.”

For the first time this season, senior goalie Reid Ellingson started both games and came out with 25 saves on Friday and 44 on Saturday.

Ellingson was named CCHA Goaltender of the Week after his performance.

“I think all year long, Reid has played well,” Kyle said. “We made the decision that we’re going to go with the guy playing best, and Reid got the opportunity this weekend.” 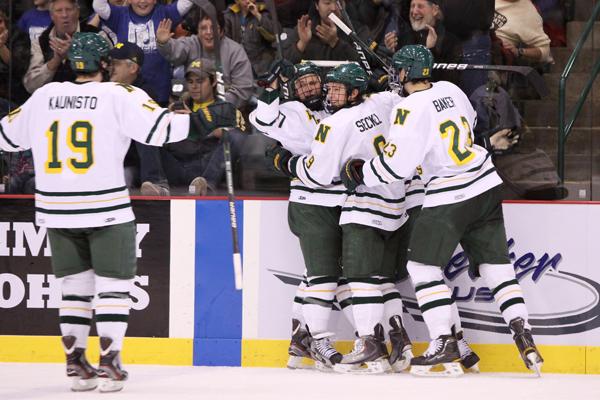 Kyle said the team had been committed to split Ellingson and sophomore goalie Jared Coreau the first four series. Time will tell the rest of the season, and the position will be performance-based, he said.

“I feel confident right now,” Ellingson said. “We haven’t necessarily gotten wins in regulation the last couple weekends, but we’ve been battling hard and our team is starting to really gel.”

The ’Cats were first to score on Friday, with sophomore center Ryan Kesti, who missed last season due to an injury, scored his first collegiate goal. Senior right wing Tyler Gron picked up the assist 6:02 into the first period.

“It was great to do it at home,” Kesti said. “Being out all of last year, it’s been a long time coming back and it was an exciting time.”

Notre Dame responded with a goal in each of the first two periods, leading the Wildcats 2-1. Senior left wing Justin Florek scored at 6:41 into the second to tie the game. They held the tie throughout regulation and overtime to bring it to the shoot out. Sophomore right wing Reed Seckel scored to win it 1-0 in three rounds.

“Shoot outs are always fun,” Ellingson said. “It’s kind of an individual challenge for the shooters and the goalies.”

After another scoreless overtime, Gron put the puck past Notre Dame in the shoot out.

“I think those two [conference] points are really good for not only standings, but also for the morale of the team,” Kesti said. “It’s a great boost for us.

Northern sold out the Berry for the second time this season on Saturday, as part of the Pink Experience.

“Anyone who’s been around sports knows how athletic teams can feed off crowd energy,” Kyle said. “If we can have that, night in and night out, this building is going to be a tough place for teams to play.”

The Wildcats travel to Columbus, Ohio to take on Ohio State University (3-2-1 CCHA, 6-3-1 overall) this weekend. Friday’s game gives Northern the opportunity to pull even with the Buckeyes in standings.

“We’re going to have to play a good road series,” Kesti said. “We’ll have to be smart with pucks, play defensively and when we get our chances, capitalize.”