Best Friends: ‘A Year with Frog and Toad’ 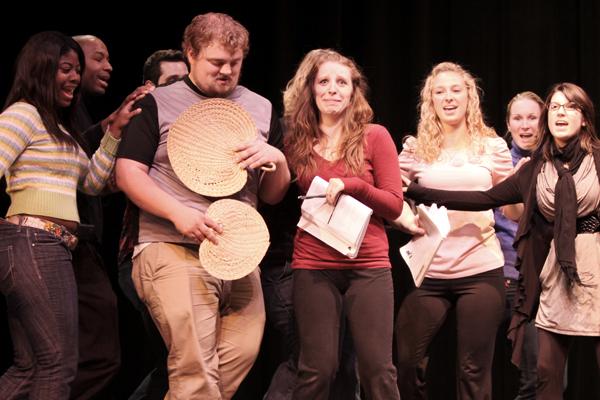 ‘A Year with Frog and Toad’ gives Marquette families a play based off of children’s classic stories, but appeals to most ages.

NMU brings to campus a fun-filled, family friendly musical, “A Year with Frog and Toad,” based off the children’s classic tale of two great friends.

The play opens at the Forest Roberts Theater on Sept. 16. It is a story of friendship that comes from the children’s book, “Frog and Toad.” It is aimed at the younger audience but adults will enjoy it too.

The play follows the life of two best friends, Frog, the cheerful and popular one, and Toad, the grumpy and sad one, through their adventures in all four seasons.

It goes through the ups and downs of a friendship and follows Frog and Toad as they complete different activates such as planting a garden, sledding, baking cookies and more.

“The moral of the play is that real friends can make it through anything,” said Andrea Knoll, a second-year masters student with degress in English and in theater. Knoll is also the costume shop supervisor.

Knoll said that the show is only about an hour and a half long and fast paced, full of energy that audiences won’t regret coming to see.

This year, the theater decided to let a design class from Northern come up with all the designs for the play, such as costumes, setting, lighting and more.

“We just bring their designs to life,” Knoll said. “Depending on the costume, it takes at least five hours to make.”

Director Ansley Valentine said it is different working with a design class, but it’s also interesting to listen to the students’ ideas and see all the designs they have come up with for each character.

“There is a girl in the design class who is especially good with face make-up and face molds, who is making animal noses and animal features for the actors to wear,” Valentine said.

Valentine said this play is different from other plays because it doesn’t have a good guy-bad guy storyline. It’s just two friends having fun and enjoying their lives.

“If the play had an underlying meaning, it would probably be kind to your friends and appreciate them,” Valentine said.

The Forest Roberts Theater invited many schools from the upper Marquette area to come and see a private showing of the play. There were four days assigned for the private showing, and they have all been sold out to schools ranging from second grade to junior high.

Along with singing about cookies in the play, the theater is selling cookies in the lobby during intermission.
It will be $2 for a nicely sized cookie.

Tickets will be $10 for NMU students and $15 for the general public.

Go to www.nmu.edu/theatre where there is a two-for-one discount coupon for students.