I’ve always said in the past that you could trust me. I hope that I’ve given you more reasons to do so other than my impressive mane of facial hair, but I’m a realist. I won’t get my hopes up.

With the semester winding to an end, I think it’s time for me to come clean with you all. My conscience can’t stand another minute of deception. With many accusing universities, even specific professors at NMU, of implanting their liberal ideals on students, it’s time for me to own up. As it turns out, you can’t trust me at all. My words this year have been written with one goal in mind … to bring you under my will. My fellow students, I am here to indoctrinate you.

And it’s not just me either. The North Wind, your high school science teacher, the professor of your entry level sociology class, NMU and every other public university in America exists for the soul purpose of brainwashing you, the student, into serving a liberal agenda.

Conservative pundits have accused college campuses countless times of being breeding grounds for liberal thought. With the recent controversies over the extra credit assignments offered at NMU reaching national news publications, it’s time for us, as students, to ask ourselves: are we really that impressionable? We’ve been accused of being airheaded, unmotivated individuals who instantly subscribe to the first ideology that’s presented to us. Well, NMU, do you agree? 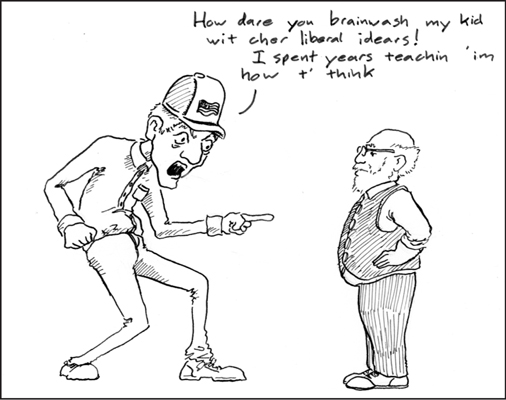 As a student, I’m starting to get sick of people telling me why I think the way I do. Maybe it was the countless hours spent studying and (for the most part) attending college courses that tired out my brain and left it open for liberal brainwashing. Goodness knows conservative free thinkers like Glenn Beck and Rush Limbaugh didn’t have college to weigh down their genius. They both dropped out –– true American heroes to the cause of freedom.

It’s true that many college professors are predominantly liberal. Oddly enough though, as a student with a political science minor, I’ve yet to come across a teacher in a politics class who wasn’t open to a well-argued opinion that they disagreed with.

Most of the closed-minded liberal teachers that I’ve had at NMU teach classes completely unrelated to modern politics. As someone who tends to lean a little to the left, it’s annoying even to me to listen to these opinionated professors go on rants, especially when they have no idea what they’re talking about. To conclude that students are liberal because the professors that teach them are liberal is insulting. This isn’t elementary school. We’re not children.

And speaking of children, did you know that many of our favorite kid’s shows are actually aimed at indoctrinating children as well? According to pundits at the Fox News Network, shows like Sesame Street and Spongebob Squarepants are rife with liberal propaganda, aimed at brainwashing America’s children to go the way of the donkey. A sponge under the sea? Come on now, what else could that possibly be but a metaphor for evil banks sending America’s mortgages underwater?

To combat the ridiculous liberal bias in children’s programming, Glenn Beck has graciously donated his time to create “The Liberty Treehouse,” a children’s history show that focuses on a more conservative take on American history. The children’s show is a part of Beck’s new online venture, GBTV, the focus of which, according to Beck is to “target the youth” in America. Irony it seems, is not in Glenn Beck’s dictionary.

The idea of a government brainwashing its people is not something that we should take lightly. Just because a majority of college students are liberal does not mean that we are the victims of some notorious plot by the government, school administrators and college newspapers. Is it that hard to believe that students can form opinions on their own?

For conservatives, dealing with a large liberal population at universities can be difficult. But the gap between ideologies is not as large as many would suppose. As political speakers, Ted Nugent and Ann Coulter drew enormous crowds from NMU students, as well as enormous criticisms from those with opposing viewpoints. But at the end of the day, many more came out to see the speaker than to protest their speech.

Personally, I love a good argument. I love radical ideas, and I love opinions that I violently disagree with. But it’s important to have respect for the person behind an opinion.

Saying that someone has been indoctrinated is basically saying that they are too weak minded to form their own opinion. Though I must admit, things would be much simpler if I could answer every argument with, “No, you’re stupid.”