After six months of construction, the Superior Dome roofing project is complete. D.C. Taylor Co. recovered the gray roof with a tan membrane. 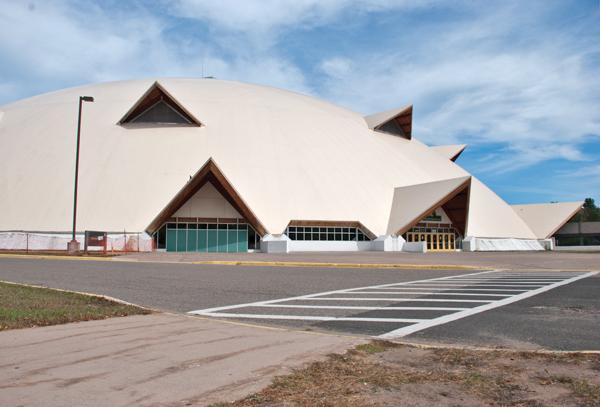 “We’re very happy with the business that came in,” said James Thams, associate director of engineering and grounds at Northern. “We had a really reputable contractor; they did a great job, and they got it done.

Thams said the schedule D.C. Taylor Co. submitted in May did not account weather delays, so the department knew construction would extend beyond the projected completion date.

“But we anticipated that they’d be able to finish before it got too cold to be up there working,” Thams said. “It’s raining, it’s snowing, and we needed to get that done before winter set in.”

Anytime it rained or wind speeds were over 10-12 mph, the workers were unable to be on the upper part of the Dome roof.

“One, it wasn’t safe for them to be up there,” Thams said. “Two, those long sheets of roof material were very difficult to manage when it was windy.”

The construction cost less than its projected budget of $2.3 million, totaling $1.925 million.

“The business came in under what we had anticipated, so I think we should all be happy,” Thams said.

Though he is unsure of how feasible they will be, Thams said the department is looking into a couple of signage options. One possibility is applying something directly to the tan membrane.

“There are issues with that, however,” Thams said. “You have snow that sheds, and that sliding of the snow could scrape off any emblems or letters that were applied directly to the roof membrane.”

Another option is having something projected up onto the surface of the Dome, so snow would be less of an issue.

“I don’t know which it’s going to be yet,” Thams said. “We’re still trying to figure that out.”