NMU submitted a plan to the state last Friday to completely demolish John X. Jamrich Hall and Gries Hall and combine the two into one new building.

The rebuilding plan is to put the faculty offices that are currently located in Gries Hall into the new Jamrich building. The building will also consist of fewer large lecture halls and more smaller classrooms.

It will be located between the Learning Resources Center and C.B. Hedgcock. There will be a sky walk that connects the south east side of the new building to the LRC.

“NMU decided to go with the new building construction plan instead of a renovation and addition to Jamrich Hall because we could build the new facility for about the same cost,” said Cindy Paavola, NMU director of Communications and Marketing.

The new design would have great energy efficiency and better utilization of space, Paavola said. It would also reduce the university’s square footage by 36,000 square feet, approximately the size of Whitman Hall.

The new building would lower operating costs for NMU by about $180,000 per year compared to the renovation plan.

NMU’s original plan was to renovate Jamrich Hall and incorporate an addition of faculty offices.

However, Northern realized it could rebuild the building for around the same price as the renovation. The total cost of each project would be $33.4 million, and the state would fund 75 percent of it.

“So if the costs are equal but one offers reduction of costs in the long run, we are going to choose that one,” said James Thams, NMU associate director of engineering and planning.

Thams said he brought the rebuilding and renovation designs to the Marketplace a couple weeks ago, so students could provide input. He said the majority of students he talked to thought something needed to be done with the existing Jamrich.

The student opinion on which plan was better was an even split. However, the students were not able to hear all the benefits and drawbacks of the designs.

The rebuilding option was also chosen so NMU can continue to hold classes in Jamrich Hall while the new building is being worked on, Paavola said. Since about 40 percent of NMU classes are held in Jamrich, she said this is a big bonus.

“Seventy-seven percent of NMU courses have 40 students or less, yet only 28 percent of the classrooms in Jamrich match that capacity,” Paavola said. “So we will increase the number of 30 to 40 seat classrooms while decreasing the number of large lecture halls.”

According to Thams, this is necessary for the large lectures that have about 300 students and for campus events such as Campus Cinema and visiting comedians. 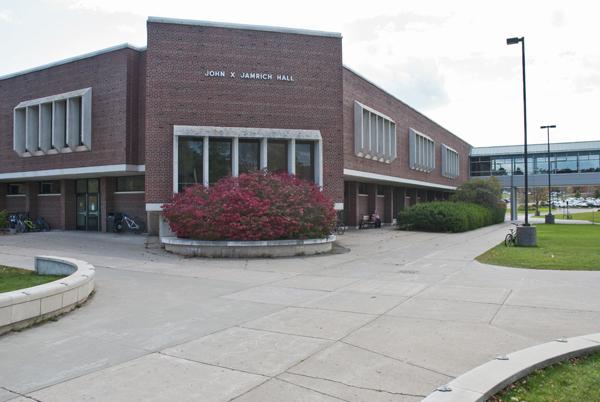 “Additionally, the classrooms will have incredible flexibility to support active learning pedagogies, so if a faculty member likes to use groups in his or her class, the room will support that as easily as it does traditional lecture style and other forms of teaching,” Paavola said.

An example of the active learning classrooms that will be built can be seen in Room 108 at the LRC.

According to Thams, the intent of the new classrooms is to get as much technology and incorporate active learning classrooms as much as possible.

“The building will be designed in a way that better supports NMU’s high-tech learning environment,” Paavola said. “This includes enhanced power, higher ceilings to support new technology and new technology tools such as multiple screens.”

The faculty currently housed in Gries Hall, a renovated residence hall, will be moved to new, modern offices. This will move faculty closer to the academic mall and the classrooms they will be teaching in.

“The English department is spread out in two buildings and two floors,” Thams said. “The new building will give them one large suite.”

All faculty, adjuncts and teaching assistants from the English department, who currently have offices in Gries and Whitman Hall will be housed on the first floor.

Criminal justice and sociology departments will be on the second floor. The math department will be moved from the science buildings to the new Jamrich.

The psychology department will be moved to the science buildings to better accommodate the rooms needed. The Ada B, Vielmetti Health Center, currently located in Gries, is yet to be determined.

“The state has just received the project request and the committee that approves capital outlay projects has not officially approved the project yet,” Paavola said.

There are seven phases in rebuilding Jamrich Hall. Phases 100 through 500 are the design phases.

According to Thams, NMU is getting ready for phase 400 and 500, when they start to engineer the building. Phase 600 and 700 are the actual construction of the building.

“When the construction of the building begins will depend on state approval,” Thams said. “We hope to start construction in the spring and open the new building August 2013. It will be about a 15-month construction period.”

According to Paavola, the new building will benefit students and faculty by incorporating student learning areas, lounge areas and faculty offices all in close proximity.

“This will create an improved opportunity for faculty-to-student collaboration and a synergy of intellectual exchange,” Paavola said.