New campus signs to be installed at NMU

NMU has begun a five-year plan to install new signs on campus and around Marquette to help visitors and new students navigate their way to and around campus.

The Wayfinding Project Committee has been working with Corbin Design, an independent consulting firm, to determine students’ and visitors’ opinions of the signs and how to find campus.

“Over the years, we do surveys on those who visit NMU,” said Cindy Paavola, director of Communications and Marketing. “One thing that became apparent was that visitors have a hard time figuring out how to get to campus, where campus began and where the admissions office is (located).”

Two years ago, students in the Marketplace were asked their opinion about the signs around NMU and where they thought that there could be improvement.

“It’s difficult to give directions [to NMU] and the signs look the same,” Paavola said.

The Trailblazers are the signs around Marquette, first installed to help visitors and new students find campus. It was important to get people entering Marquette to campus, Paavola said.

“I think that these signs are very helpful to anybody visiting Northern for the first time,” said Karla Kopp, a senior ecology major. “It is nice to see there is more than just one sign in Marquette so that way people will be able to find their way to campus a lot easier.”

Campus entry signs are being built to mark the main entrances and the boundary of NMU’s campus. Campus directory signs will be installed for pedestrian use. 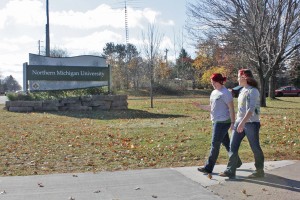 “[The entry signs] go a long way to mark the entrances,” said James Thams, associate director of engineering and planning/grounds.

The signs will also have a color-coding system applied to five specific areas around campus: NMU Technology Campus, NMU Sports Campus, Up Campus, Down Campus and Academic Mall.

“[The color-coding system] is not for people who know the campus, but it’s good for first time visitors,” Thams said.

The Wayfinding Project Committee worked with the Michigan Department of Transportation to get their signs permitted for the highway and with Michigan Public Works for approval of the city street signs.

“I think they’re awesome,” said Laura Judge, senior Spanish and environmental science major.  “I remember being a freshman and trying to find campus.  All I knew was to find Fourth Street to get to campus. Signs would’ve been helpful.”

Two additional campus entry signs will be at the intersections of Wright Street and Tracy Avenue, the Berry Events Center and Fair Avenue.

These intersections will be similar to those of the Seventh Street entrance with one large sign and a complimentary sign on the opposite side of the road.

“I like the design,” Judge said.  “It goes with the ‘Northern Naturally’ theme and promotes the natural appeal of the university.”

The funding for this project came from the general maintenance fund.

“I honestly think that the (campus entry) signs that we had prior were sufficient,” Kopp said.  “Maintenance funding should go to things that really need maintenance, like the dorms and apartments.”

Three smaller boundary signs will be built at the corners of Presque Isle and Kaye, Center Street and Lincoln Street and at the north entrance of the Superior Dome.

The Wayfinding plan is currently in its second year of the five-year plan.

“The new signs give a nice welcome image to the university,” Judge said.  “It might be a little overdone and could’ve been more simplistic with fewer flowers. But I understand that it gives a nice aesthetic appeal.”