The Wildcats split their first two games of the season after an 87-53 loss to the Lewis University Flyers last Tuesday. Head coach Doug Lewis said the team needs to focus on the basics of the game.

“You got to step up and take charges; you got to get on the floor for loose balls. We’ve got to make every possession a hard possession,” Lewis said. “If we could have done the little things, we could’ve given ourselves a chance to win.”

The Wildcats kept the score close early on, but were forced to turn to the bench after senior forward DeAndre Taylor and senior center Jared Benson both picked up two fouls.

NMU went into the half trailing 47-24 and was never able to catch up after the Flyers first half scoring outburst.

“You want to play [well] in front of your home fans because we’re trying to win back our fans and when you put on a piss-poor performance like this, it’s almost like it’s the same old Northern,” Lewis said. “But we’re men. Suck it up when you’re down, get up and do something about it.” 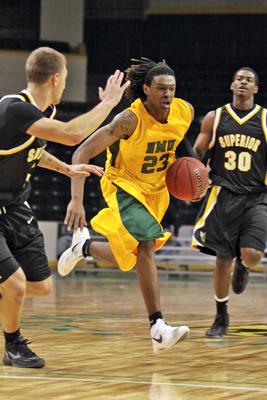 Freshman guard Haki Stampley led NMU with 16 points, and junior forward TJ Cameron chipped in 12 off the bench. Benson added 11 points despite playing only 16 minutes due to foul trouble.

“It’s really humbling but… it’s early. We have 24 more games,” Lewis said. “I’m not discouraged. Lewis (University) is a solid team who has a couple of veterans who have been in the system for a while and they execute.”

The ’Cats first game of the season was last Saturday and six first half three-pointers including four from Stampley, gave NMU all they needed as they cruised to an 81-55 win over the UW-Superior Yellowjackets.

“He’s talented,” Lewis said. “I have a talented young crew, and he’s one of the guys that can create his own shot. He’s really good defensively. He’s long, he’s quick and he likes playing defense.”

On the defensive end, NMU forced 18 turnovers and held the Yellowjackets to a 35.2 shooting percentage. Northern played everyone who dressed and Lewis said the added depth helps his team play up-tempo.

“We got guys who are long and athletic and can get after it defensively and that’s really important in our system,” Lewis said.

The ’Cats got a big boost from Taylor who put up 20 points including 12 in the second half to go along with his six boards. Stampley said Taylor provides guidance on the court.

“He brings a lot of leadership,” Stampley said. “We rely on him a lot to score; he’s very explosive and he can make things happen with the ball.”
Stampley scored 18 points in his first game. Sophomore guard Chris Paquin added 11 points and Benson scored 10.

“We really played hard,” Lewis said. “I want to play nine or 10 guys because now we have the quickness and athleticism to extend our defense and get after it with pressure on the ball.”