’Cats drop two against Ohio State, look to bounce back against Spartans

“I don’t know what it is playing on the road, but we made some uncommon mistakes,” sophomore center Vigier said. “We didn’t play the game that we needed to play to win.”

Northern came out strong against OSU (5-2-1-1 CCHA, 8-3-1 overall) on Friday, scoring the only first-period goal. Stephan Vigier hit the back of the net at 16:07, assisted by junior left wing Kory Kaunisto.

The Buckeyes tied it at the beginning of the second period and scored three more unanswered goals in the third, including a power play and empty net goal.

However, the Buckeyes fired right back with a power play goal just a minute later, and sealed the win with a fourth goal.

“At times, we showed glimpses of who we really are,” Walchuk said. “But for the most part we didn’t play up to our potential and didn’t work hard enough throughout the weekend, and it obviously showed on the scoreboard.”

Senior goalie Reid Ellingson stopped 34 shots on Friday and 19 on Saturday before being replaced at the 29:08 minute by sophomore goalie Jared Coreau.

“Our goaltending was great,” Walchuk said. “They gave us a chance to win each night, and unfortunately we just didn’t come through.”

Kyle said he made the decision to pull Ellingson after Ohio State scored its second goal against the Wildcats. Coreau made 15 saves in his 30:52 minutes of play. 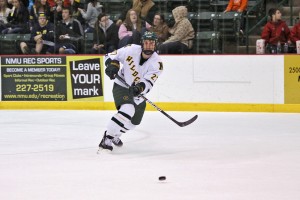 Walt said the ’Cats, who have been outshot in nine of 12 games this season, need to produce more offensive opportunities. Ohio State posted 38 shots each night, compared to Northern’s 13 shots on Friday and 19 on Saturday.

“We have guys who offensively need to simplify their game a little bit, create basic chances and try to take advantage of those,” Kyle said. “A shot on net is rarely a bad decision.”

Time in the box took a toll on Northern, who took 10 penalties for 31 minutes on Friday and seven for 22 minutes on Saturday.

“Penalties were crucial,” Walchuk said. “We took them at bad times in the game and they capitalized on our penalties. It kind of took us out of the game.”

OSU scored on two of 11 power play opportunities throughout the weekend, whereas Northern was unsuccessful in its three opportunities.

The Wildcats have a 3-0-3 overall record at home and 1-5 away. Kyle said the team’s goal this weekend is simply to play better.

“We’re sick right now,” Kyle said. “It’s not a disease that’s going to kill us, but it’s a common cold and we need to fix it.”

“Earlier in the year we were playing good hockey, taking care of the puck, taking a lot of shots and limiting their chances,” Vigier said. “We just have to get back to the way we know how we should play.”