Thanksgiving break wasn’t a time for rest, as the NMU men’s basketball team was busy playing three games in four days. The ’Cats finished off their road swing with a 91-58 win over University Michigan Dearborn on Monday. Head coach Doug Lewis said the team showed composure in the third game. 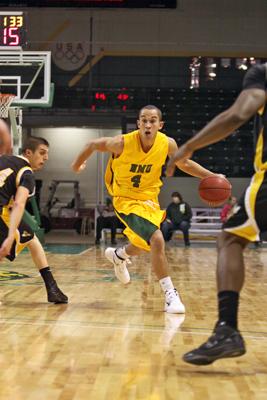 “We played hard,” Lewis said. “One of the things I wanted to stress to our guys was mental toughness and we displayed mental toughness to get through our third game in four days. Our guys were a little tired but they sucked it up and gave me a good effort and we got the victory.”

Lewis said the combination of the big guys down low and the guards connecting from outside makes the offense hard to stop.

“With (Jared) Benson and (Derek) Hussinger inside and our guys making three’s, its going to loosen up the defense and if we can continue to do that we’re going to have a balanced attack,” Lewis said. “If we can dominate the paint and play well on the perimeter, we can beat any club in the country.”

“He’s developing,” Lewis said. “We saw this when we were recruiting him, he’s a kid whose really nimble and can get up and down the court. He has really good hands and now he’s just starting to display confidence and we need that in the paint.”

NMU’s first games of the break were at the Indianapolis tournament last Friday and Saturday. The ’Cats dropped their first game 76-81 to St. Josephs and lost their second game 64-80 against Indianapolis. Lewis said playing experienced teams will help NMU in conference play.

“We played two top-notch caliber teams in the University of Indianapolis and St. Josephs,” Lewis said. “St Josephs went to the elite eight two years ago and last year Indianapolis went to the NCAA tournament. We wanted to play some teams with experience to help our guys develop.”

Against St. Josephs, NMU was only down two points with 5:33 left but were unable to overcome their 28 turnovers. Senior center Jared Benson said the turnovers hurt but the team is working on their late game offense.

Against St. Josephs, Taylor led NMU with 19 points and Benson chipped in 17 points and nine boards. Again against Indianapolis, it was the senior combo of Benson and Taylor leading the ’Cats scoring with 11 and 10 points.

NMU’s next game is at 3 p.m. Saturday, Dec. 3 in Houghton as they take on rival Michigan Tech (2-3). Benson said Tech provides a challenge and ball control is essential.

“Michigan Tech is always really well prepared,” “We have to come together and really take care of the ball and value every possession.”