Some Christians ruin God for the rest of us

A few weeks ago, I wrote about how America needs to remove religion from government and politics. I described atheists as a minority group, and lumped myself in with them. As any article about religion is apt to do, I offended a few readers. No sweat, right? But there was one critic that I could never forgive myself for insulting. I’m sorry Grandma.

Now let me stop you right there. Cast those images of a brittle old lady out of your mind right now. At 82, my Southern Baptist-raised granny is as tenacious as she was at 22. If you met her, you’d be apologizing, too. If you ever crossed her, you’d be running. But I don’t write this out of fear. Few are more compassionate and caring than my dear old grammy.

While Grandma Dyer is a devout Christian, she would be the first person to tell you that there are more than a few groups out there giving God a bad name. But the vast majority of Christians don’t make it to prime time on Fox News, where they are allowed to spit hateful rhetoric. Just like my grammy, there are kind, spiritual and accepting Christians everywhere. They are the true silent majority.

Religion, more specifically Christianity, is a tool as well as a belief. As such, it can be used and abused accordingly. For some, God is a way to come to terms with themselves and find understanding in life. For others, it’s an excuse to exclude anyone who is different. The morality of Christianity is determined less by overall doctrine than it is by the individual practicing it. Jerks will be jerks, no matter which God they worship. 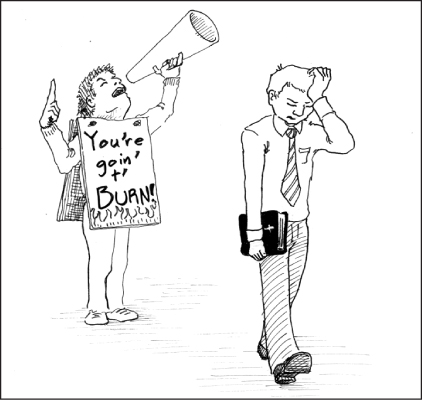 As a teenager first starting high school, religion was always a concept I struggled with. I always wanted to believe, but when I was forced to defend the same core religion shared by the Westboro Baptist Church, creationists and abortion clinic bombers, I lost faith.

But, with a little help from my grammy, I came to realize that religion has an immense benefit to secular society as well. So often do we get caught up in the semantics of the existence or nonexistence of God that we forget about the core message of Christianity –– the message to live, to love and, most important of all, to forgive.

Regardless if you believe in a Judeo-Christian God or not, it’s hard to argue with the positive results that religion is capable of achieving. Whether it’s using a higher power to defeat alcoholism in Alcoholics Anonymous meetings or a convicted felon finding redemption through the teachings of the Bible, religion has the capability to help even the most downtrodden soul find meaning in life.

But in that same breath, religion (even specifically Christianity) is capable of tremendous evil. Looking back to the millions upon millions slaughtered during numerous Crusades, the wars of the Prostestant reformation, the inquisition of Spain and the Salem witch trials, it’s enough to wonder if religion is worth it at all.

When you look past contradicting rhetoric and actually look at the guidelines that Christians are supposed to abide by, it’s difficult to see how any of these atrocities are reinforced. In reading literal teachings of Jesus as recorded in the new testament (you know, what Christians are supposed to follow in the first place) it’s hard to come away with anything other than a message of love. Love for your neighbor, love for the poor, the downtrodden, love for the meek and even love for your enemy … it’s enough love to make a hippie on Valentine’s Day sick to his stomach.

The real enemy in the war of faith is not believers, nor is it non-believers. It is the ignorant. Those who see their religion as a trophy, to be flaunted in the face of their opponents. Those who go on TV and compare homosexuals to wild animals and promote intolerance towards other forms of belief. It is these people who should be the outcasts of our society.

I never really got my faith in God back in a literal sense, but I still attend church as often as I can. Why? Even though I’m an atheist, the majority of churches that I’ve attended immediately accepted me as family. Maybe it’s selfish, but going to church makes me feel good. And frankly, that’s all that really matters to me.
That, and I go for the delicious after-church snacks. Because if God is anywhere, he’s in the church snacks.