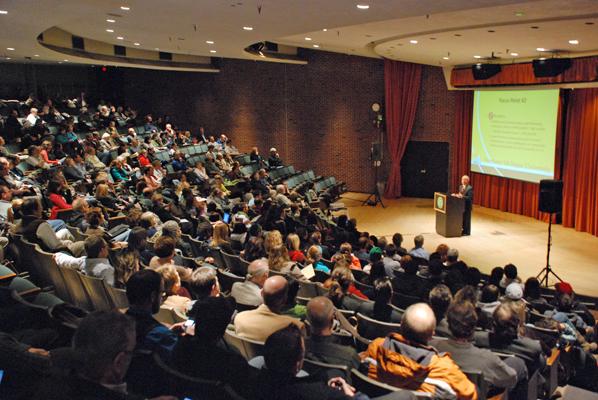 NMU President Les Wong provided updates on eight focus points of the university to a crowd of students and faculty during the campus forum on Wednesday, Nov. 30.

The first point, internal communications and improving operational focus and accountability, covered Wong’s new 11-member cabinet and has been beneficial to the president’s council.

“The new president’s cabinet has really paid off,” Wong said. “I really needed a highly focused team of 11 people. I think it also provides some depth in decision making that compliments the president’s council very nicely.”

Updates on the provost search were also provided during this time. In January, Northern will begin looking at files of potential provosts, and it is anticipated that a new provost will be confirmed during summer 2012, Wong said.

The second focus point concerned how to better NMU’s reputation by diminishing the “just Northern” reference many students and potential students have about the university. ASNMU is partnering with Communications and Marketing to work on a poster series that will give insight on the high quality education NMU provides.

“I think the education our students receive here is absolutely the best and absolutely magical,” Wong said.

NMU is also planning to create a health and wellness center that would serve as a one-stop center available to students and faculty, which was covered in the third focus point.

The university is seeking a location for the center, estimating and calculating costs associated with the plan and finding external sponsors, Wong said.

“Of all the eight items I’ll mention today, that one has really captured the imagination efforts of a lot of people on campus,” Wong said.

Another key focus point was the idea of how being in a rural atmosphere impacts NMU and the community. One of Northern’s unique qualities is that it is rural, far away from a city and that the university draws many students from towns surrounding the Great Lakes.

“We are a destination campus,” Wong said. “If you’re going to come to Northern, you’re coming to Northern.”
Wong asked those who write grant applications, papers or lectures about NMU to describe the university as being rural because it sets it apart from others.

In focus point six, Wong confirmed that the university will be working under the 4-10 work week schedule during summer 2012. Job position descriptions will be updated and the decision to move to paperless checks was also addressed.

The seventh focus point included ongoing projects such as the athletic review and the extent to which Northern will look into the USOEC program.

Along with an academic program review that will focus on how to redirect resources so that students can benefit more from academic resources and coaching changes in Wildcat football.

“We are trying to live up to the expectations that Wildcat athletics have long known, and we want to bring that back to campus,” Wong said.

Wong then discussed, in the eighth focus point, how interdisciplinary and interdepartmental work have contributed to many of the ongoing projects such as the health and wellness program and the “Voices on the Water: Great Lakes Native America Now” project.

“It’s exciting when an idea strikes a group of people and they just take it up,” Wong said. “The best job about administration is to know when to get out of the way, and that’s what I’ve done.”

The recruitment and retention efforts were also included in this focus point. The decline in college students is nation-wide and something to consider when making recruiting decisions and retention plans, Wong said.

In order to combat the decline, Wong asked members of the council and cabinet to begin looking into what he calls the four-in-four plan.

The plan would look at how the university could add 400 new students in four years and would focus on four general areas: improving retention rates, having better initial placement into courses, academic investments and athletic investments.

Possible changes would be an installation of academic retention rates for each department, an extension of the First Year Experience from one semester to two and adding faculty capacity to retain more students, Wong said.

In addition to the eight focus points, Wong addressed the budget plan for 2013. He confirmed that, although performance funding is becoming a national way to finance universities, he does not see NMU placing a restrictive admission policy because it doesn’t fit how Northern represents higher education.

“I hope people will remember, most of all, the spirit of community that our students, all of you have, in making sure that we are an integral part of Marquette and Marquette County,” Wong said. “I’m really proud of what all of you are doing.”