Wildcats bounced by Huskies on road 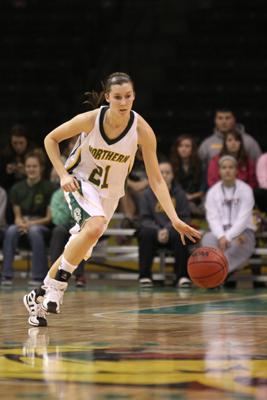 Missed layups and a three- point barrage by No. 9 Michigan Tech handed the NMU women’s basketball team (0-1 GLIAC, 3-4 overall) a 72-49 loss last Saturday in Houghton. Head coach Troy Mattson said the combination was too much for the ’Cats to overcome.

“I thought we fought and hung in there in the first half, but we just missed too many layups from our end,” Mattson said. “They’re making threes and I think we had 14 opportunities to make layups that we missed.”

Tech’s guard Krista Kasuboski had only hit two threes going into the game.

Freshman guard Alyssa Colla said the plan was to sag off her and guard the post. The strategy backfired as Kasuboski hit five of 10 from long range.

“We were helping off her in the post and they just kept kicking out to her and she was hitting them all,” Colla said.

Tech shot 56.5 percent from deep and made more threes (13-24) then two-point shots (12). Mattson said the Huskies home floor made it a challenge.

“I thought Tech played really good; they made shots,” Mattson said. “When Tech’s making shots on home court, they’re going to be a tough team to beat no matter what type of night you’re having on the offensive end.”

On the offensive end, the ’Cats shot a perfect 14-14 from the charity stripe and made 5-10 three pointers, but were held to 35.7 percent shooting in the second half.

“We executed extremely well against Tech on the offensive end, we got the ball were we wanted it, we just missed so many layups and it just kept compounding itself,” Mattson said. “We have to be able to reward ourselves by getting the ball in the basket whether its layups, open threes or free throws.”

The ’Cats were led by senior guard Hillary Bowling’s 13 points. Colla chipped in 12 points and added three assists. Mattson said he likes what he’s seen out of Colla this season.

“Alyssa’s played really well as of late,” Mattson said. “She’s becoming a go-to scorer, somebody we can trust to put the ball in her hands and make the right decisions.”

The Wildcats started three freshmen against Tech and have been giving their rookies heavy minutes all season.

Mattson said he’s impressed with their play, but they need to take a bigger role in the offense for the team to get wins.

“Overall, the freshmen defensively have done an incredible job for where we’re at right now,” Mattson said. “We need to be able to find some more points because we are playing a lot of freshmen, so there going to have to start to step up to this level and realize we need points from them too.”

Mattson said the schedule hasn’t been easy for the ’Cats who have played six of their seven games on the road and haven’t played at home since Nov. 15.

“It’s hard to go on the road and win no matter who you are and where you’re at,” Mattson said. “We’re trying to find some confidence by getting the ball in the basket and when you’re on the road every night in a different gyms, it’s not easy.”

Mattson said the team is focused on the Tiffin game.

“I think Tiffin’s one of the best teams in the league,” Mattson said. “It will be a really hard game for us, but if we’re going to be any good we have to learn how to win at home, no matter who were playing.”