Oh Herman Cain, I wish I could say we hardly knew you.

After yet another kinda-sorta-maybe-alleged sex scandal, pizza mogul and business pro Herman Cain is officially out of the running to be the Republican nominee for president. And while I’m sad to see him go (maybe he’ll take a vacation in Uzbecki-becki-becki-becki-stan-stan?) I can’t help but wonder: why on earth was he running in the first place?

With unemployment at record highs, the prospect of electing a corporate leader into the White House has become more and more appealing to Americans, particularly to those who are unemployed. With a solid knowledge of the path to business success, candidates such as Cain and (dare I say it) Donald Trump should be the perfect fix to an ailing economy. Right?

Cain claimed that he can create jobs to get Americans working again. But candidates coming from the private business sector overlook one major ideological flaw in their approach. Presidents don’t hire, and they don’t fire, outside of their own staff, of course. Cain’s 9-9-9 tax plan sounded awful catchy, but most critics agree, the 9-9-9 plan would turn our economy upside down. Running a corporation, as it turns out, is very different from running a country. 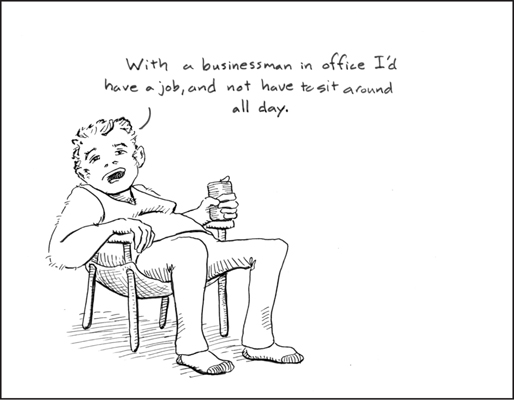 With November’s unemployment rate at 8.6 percent nationally, current unemployment statistics are something the Obama administration would like to ignore. Republicans, as they often do, are suggesting that a tax decrease is the answer. Unfortunately for them, history has shown us that lower tax rates show no positive correlation to job growth.

Quite the contrary, according to the Bureau of Labor Statistics and Tax Policy Center, job creation doubled when the top marginal income tax rate (taxes on millionaires) was above 50 percent. And when was our unemployment rate the highest in the last 60 years? About halfway through Ronald Reagan’s first term, when it reached a harrowing 10.8 percent. Trickle down indeed.

So maybe Democrats are the answer to the unemployment problem. Do higher taxes and increased government spending create jobs? Not particularly, no.

While President Obama’s stimulus package, which cost almost a trillion dollars, did spur modest job growth, it came as a massive blow to our national debt. As much as I love free money, our government can’t afford to pay for each new American job. I wonder what going bankrupt will do to unemployment?

Oh, fun fact: which president in the last 30 years had an average yearly unemployment rate that never rose above six percent? If you answered George W. Bush, you get a gold star.

So what’s the answer here? Who should we vote for in 2012 to get America working again? Imagine me answering in the grumpiest old man voice that you’ve ever heard, “Screw ’em all!” Because in the end, it’s not politicians (nor businessmen pretending to be politicians) who create jobs. It’s the American people who run our economy.

Back in September, “Forbes” published an article ranking our presidents from the past 60 or so years in terms of their effect on the economy and unemployment. Not surprisingly, Bill Clinton topped the chart, boasting a low unemployment rate and an eventual budget surplus.

But, according to the “Forbes” article, even Clinton’s success involves a great amount of sheer luck. The ‘90s represented a decade of massive technological advances, along with an increased U.S. business presence overseas. Though Clinton’s fiscal responsibility and corresponding budget surplus certainly didn’t hurt the business climate, America led the charge in the Internet age. The American people put their country on the path to success, not the government.

As citizens, we need to support our country any way that we can. That means buying American products from American companies. It means inspiring innovation in the business world. It means being the best that we can be.

In the upcoming election, politicians from both sides of the aisle will try to convince you that their policies are the ones that will boost us out of the recession and put America back on the right track. When it comes to both political parties, I’ll always be skeptical. But if you want to support one party or the other, that’s fine too. Just remember, the suicidal cult Kool-Aid comes in two flavors: red and blue.