Winter break gave the NMU women’s basketball team the jumpstart they needed heading into the final stretch of the 2011-2012 season.

The ’Cats won four of six contests including three on the road to run their record to 4-4 in the GLIAC and 8-7 overall. 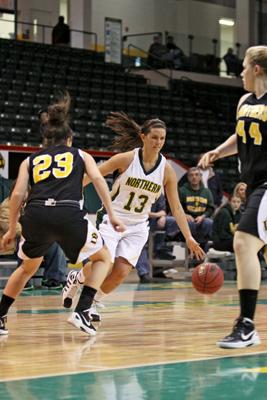 “Anytime you can go on the road and sweep a trip you got to feel really good about yourself,” Mattson said. “We’re excited about what we did this last weekend now we just have to build on it.”

Against Lake State it was the senior backcourt duo of Chelsea Lyons and Hillary Bowling combining for 23 points, 15 rebounds and 11 assists to pace the Wildcat attack.

Mattson said he’s encouraged by the play of his veterans.

“They’ve been awesome the whole season; they just continue to play well and lead by example,” Mattson said. “They both have shown the young people how it’s supposed to be done out there on the court and I can’t be happier for them.”

The first road win of the break came on Dec. 18 against the Grand Valley State University Lakers. The ’Cats escaped with a 54-52 win. Bowling said the win was a confidence booster.

“It was really important Bowling said,” “It kind of showed everybody that even though we are young, we are good and we can compete with the bigger teams.”

Bowling led the NMU with 16 points and sophomore center Annie Rubendunst chipped in 11. Mattson said the win gave the team the push they needed heading into the final stretch.

“Up to this point that’s the biggest win of the year for us,” Mattson said. “To go into Grand Valley and get a win against a very quality opponent really set a table for us and it kept us in the conference race.”

Mattson said he’s been impressed of late with the play of Rubendunst. Over the weekend the center scored 24 points and chipped in 17 boards in the two victories.

“I think Annie Rubendunst has been the biggest thing that has helped spark us,” Mattson said. “She has played extremely well the last month; she gives us another scoring option.”

Along with the play of Rubendunst and the seniors NMU has gotten strong play from freshman guard Alyssa Colla and freshman center Courtney Lemon.

Bowling said the play of the younger players has contributed to the team’s success.

“They know where to be, they know what to do and they don’t play like freshmen,” Bowling said. “It’s really comforting being a senior and being so young to have freshmen like that.”

This weekend the ’Cats host a pair of GLIAC North opponents with a chance to move up in the standings.

The first game of the weekend is against Grand Valley and with a win the ’Cats would move into third place.

“It’s a big game because if we get a chance to sweep them we own a tie breaker on them all year long,” Mattson said.

The ’Cats and the Lakers tip off at 5:30 p.m. on Thursday, Jan. 19. On Saturday at 1 p.m., NMU hosts the GLIAC North leading Ferris State University Bulldogs. Mattson said he is encouraged with the remaining schedule.

“Our schedule is starting to fall into our favor,” Mattson said. “It’s our home court; we have seven of our last 11 at home if we want to do anything in the conference we have to win these home games.”