The break ended on a positive note for the NMU men’s basketball team (3-5 GLIAC, 7-8 overall) with a 63-55 win last Saturday against the Lake Superior State University Lakers.

The ’Cats held the Lakers to 28.6 percent shooting and forced 18 turnovers. Senior center Jared Benson said he was impressed with the teams start.

“We came out and played hard right off the bat and that been our problem most of the year, we had come out slow and dug ourselves a hole,” Benson said. “Everybody played together and we managed to sustain it for 40 minutes.”

Senior forward DeAndre Taylor led the ’Cats with 19 points on 8-11 shooting including some big shots late. Senior center Jared Benson chipped in a 13-point, 13-rebound double-double to go along with his seven blocks. Head coach Doug Lewis said his length contributed to the defensive success.

“On the defensive end he played great,” Lewis said. “He was always in position to redirect shots and when we can get him playing like that and protecting the rim we can really get out on the perimeter and pressure the ball.”

The ’Cats went 3-4 during the break and all of their losses where by eight points or less.

The lineup will look different in the final stretch of the season with the departure of senior guard Martin Gross and freshman center Derek Hussinger, but Lewis said the team still has the depth to play their game. 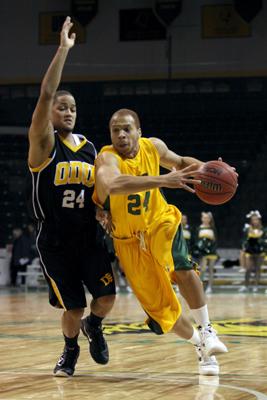 “I think were still pretty deep,” Lewis said. “Of course it hurts our depth but we have other guys who have picked up their game and that’s what you do when you lose guys.”

Junior forward Joe Simon returned over break after missing the first part of the season with an elbow injury.

Freshman point guard Quinten Calloway is also making his return this weekend after missing over a month with a foot injury.

Lewis said he is excited to get a true point guard back in the lineup and also thinks senior forward Rashano McRae and Benson can shoulder the load in the paint.

“Jared just has to stop getting those silly fouls. He’s 6’10 and with long arms he’s 7’1, he just has to protect the rim,” Lewis said. “McRae is capable of handling the backup role and I think were going to be okay for the rest of the season with those two guys.”

Northern plays seven of their last 11 games at home this season a stretch that Lewis knows will be crucial to a birth into the GLIAC tournament.

“We’re right there in the conference tournament but we need to win our home games,” Lewis said. “You take it one game at a time in this conference giving anyone can beat you on any given night. I think this time of the year our guys know what’s at stake so they will come focused.”

On the season, Stampley is leading Northern in scoring with 15.2 points a contest. That puts him ninth in the GLIAC and first among freshmen. Taylor is second with 14.3 points a game and Benson is averaging 12.4. Taylor is also leading NMU with 6.3 rebounds a game. Benson is pacing the team on the defensive end with 1.8 blocks per game which is tied for second most in the GLIAC.

This weekend the ’Cats will look to avenge a loss against Grand Valley. Tip off is set for 7:30 p.m. Thursday, Jan. 19. At 3:00 p.m. Saturday, Jan. 21 NMU battles the Ferris State University Bulldogs. Both games are at the Berry Events Center.

“It’s money time and our seniors need to play consistent,” Lewis said. “If we rebound and play defense like we’re trying to emphasize to our guys we can beat anybody in the conference.”