How should Northern define diversity?

On Monday, government workers and most public universities took the day off in recognition of Martin Luther King Jr. Day.

Then, there were Northern Michigan University students, who were beginning the winter semester, waking up early and updating their Facebook statuses to show their dismay towards NMU’s “school on MLK Day” policy.

At the “Let’s Chat About Diversity” forum with President Les Wong in the Starbucks lounge on Tuesday night, students were surprised to hear the real reason as to why they, year-after-year, still have to go to class on the third Monday of January.

Wong began the discussion, which was in honor of Martin Luther King week on campus, with a story from when he was a young faculty member at Pierce College in Tacoma, Wash.

“We invited Coretta Scott King to be our graduation speaker,” he said. “And I had the wonderful, unforgettable experience of having 15 minutes alone with her –– she was such an icon and I think people were afraid to go up and speak to her –– but I thought, this is a once in a lifetime thing.”

Wong said he became engaged in a conversation with King about the role of education, among other things.

“I asked her, ‘What do you think you and your husband –– of all things in the world that you could or could not control –– would want a culture to do on behalf of your name?’” Wong said. “Without a breath, she said ‘Young people ought to be in school.” 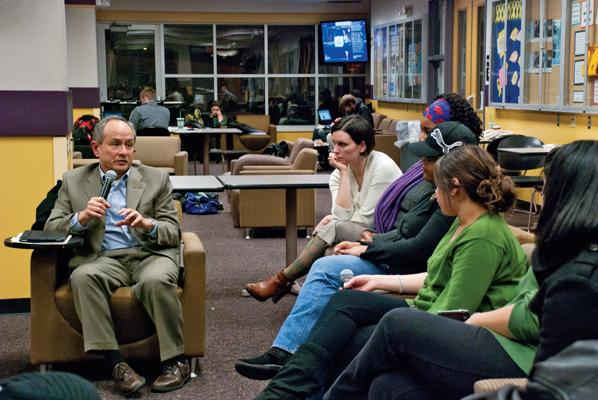 “And I said, ‘You know what, I’m going to promise you that no matter what, if I were to ever become a bigger wheel than I (am now), will honor that.’ She shook my hand and said ‘I hope you will.’”

While many students sat visibly surprised by the story, Wong began the forum by asking the students a series of questions relating to diversity on campus, including how Northern can become a more welcoming environment for minority populations.

“In a way, we need a much larger (minority) community, and we need to find the strategy that gets and attracts students of color, faculty of color, and administrators of color,” Wong said.

Northern is currently eight percent diverse, but as Wong said, diversity can be interpreted in many different ways. He mentioned the two older students that attended the forum, bringing to light the fact that 80 percent of the NMU student population is between the age of 18 and 22.

“We talked a lot about some of the key issues – equality and scholarship, the welcome nature of the community, and the fact that, as the students said, you can kind of leave your city-ness behind you.”

Grad student and Black Student Union president Aaron Whitaker is one student who has embraced the Northern environment, despite her Detroit roots.
“(Northern) is one of those schools that you have to come out of your comfort zone to actually enjoy,” Whitaker said, echoing what most of the others attendees had to say. “It’s something that if you want to do, you’ll do it – Northern is not Michigan State.

Spreading the word to minorities, especially those from cities like Detroit, Grand Rapids and Chicago, during the recruiting process is perhaps the biggest issue for NMU to address, according to many students and even President Wong.

“I thought it was a fascinating discussion tonight about city versus country,” Wong said. “When you are raised in that city environment, you learn to protect yourself, you learn to be aware, and then suddenly you’re in an environment where instead of DEFCON 2 you’re at DEFCON 5 – you still have to be alert and stuff, but not all the time.