It’s no secret that NMU has many talented athletes who devote much of their time and effort to a sports. It’s also no secret that a main reason athletes play to begin with is to see who the better man, woman or team is.

But there are some athletes who define their performances in sports to be more than just about winning or losing. 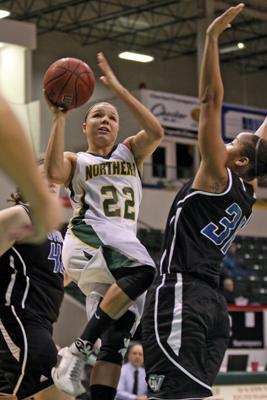 To some, it’s all about that indescribable passion, drive and love for the sport that makes them want to go a little further and push a little harder to achieve nothing short of success.

Senior point guard Chelsea Lyons is one athlete who appears to have a never ending supply of all three qualities. Lyons said her love for basketball runs deep and that there’s no greater feeling in the world than being on the court.

“I’m always so happy to play basketball,” Lyons said. “Every time I step out onto that court, I just get a sense of relaxation and the eagerness to always learn new things. But most of all, I live for the competition basketball brings. It’s what really gives me a true love and respect for the game.”

Playing basketball and soccer since the third grade, Lyons said her primary sport and true love growing up was soccer, but basketball was never too far behind. Lyons eventually began to play both sports with ambition and vigor.

In high school, Lyons lettered four times, an All-conference selection in basketball for four years, and All-state as a senior. She was also All-conference in track and All-state in soccer. She said no matter what anyone told her what she can or cannot do, she would go out of her way to prove them wrong.

“One of the biggest reasons for my self-drive is the fact that I would have people tell me either I couldn’t do something or that my chances were very slim,” Lyons said. “For me, that was more reasons to prove people wrong and show them I could do it, no matter what the situation was.”

After high school, Lyons attended and played both basketball and soccer for the University of Wisconsin-Green Bay for three years. She said while it was a great learning experience, she wasn’t getting any court time and it was a hard thing to deal with.

“I was really focused into soccer more than basketball at that point,” Lyons said. “I always had a positive attitude and gave it my all, but not having any court time really did get to me. I knew I had the talent and could be an asset to the team, but when you’re always one step behind the senior athletes, it’s tough.”

During her junior year, Lyons considered leaving basketball and was going to focus mainly on soccer. 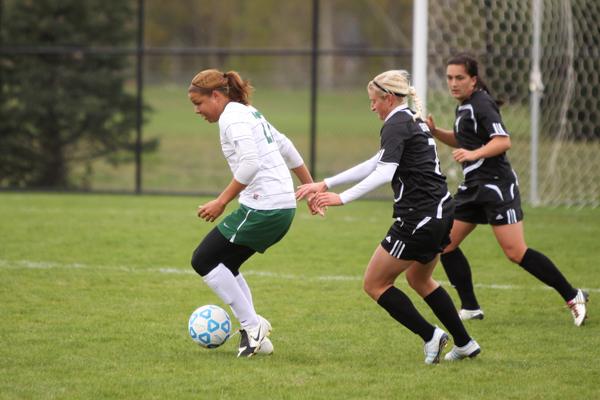 She realized she would miss the sport too much and looked at what her options were. It was then she decided that transferring was the best option.

“I was looking at a few schools when I decided to transfer,” Lyons said. “But a lot of them only wanted me to play one sport because they were worried that I couldn’t maintain my GPA along with performing both soccer and basketball. After looking at several schools, I talked to Troy Mattson at NMU and he said they would find a way so that I could play both.”

Since then, Lyons has enjoyed her time here at NMU and plans on graduating this semester. She said she’ll miss playing for NMU and has hopes to play basketball after college.

“I’ve really enjoyed my time here at NMU and had the chance to work with some great coaches and teammates,” Lyons said. “After I graduate, I’d love to play basketball in the U.S. or overseas. If for some reason basketball isn’t in my future, then I plan on going in the Marine Corps.”