The Wildcat club hockey team is coming off two undefeated weekends of hockey in a row that have them tied for first in the WCCHA with St. Cloud State University.

NMU played Michigan Tech on Friday, Jan. 20 and the University of Wisconsin Oshkosh on Jan. 21 and 22. The ’Cats swept the weekend starting with a 7-3 win over Michigan Tech. 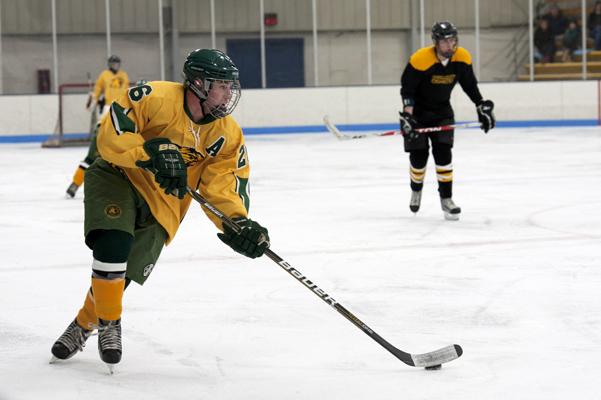 The team continued its success by shutting down Oshkosh in both games, winning 9-1, on Saturday and 12-0 on Sunday.

January 28 and 29, the team traveled to play a series against the University of Minnesota-Duluth. Again, the team came back with victories of 3-1 and 2-1 for a weekend sweep.

Assistant coach Nino Fogaroli said Saturday’s game started off slow but the team was able to pick it up about halfway through the game.

“It took us the first period and half of the second to get warmed up and going,” Fogaroli said. “When we came into the third our guys stepped up, took control, and started putting some in the net.”

Fogaroli said that there were a lot of penalties not called due to a lack of officials, but was proud of the team for keeping their emotions under control.

“Duluth started getting cheap and the referees weren’t calling it,” Fogaroli said. “We didn’t let it sidetrack us from what we needed to do.”

Bissett said he was able to push himself and give the team some cushion when they needed it.

“We weren’t getting much production as an offense,” Bissett said. “I got a nice pass for the first goal from Brad and then I got the game-winner for my second goal.”

O’Donnell said even though the ’Cats have won six in a row, they need every person to contribute if they want to win the conference championship in two weeks.

“Our line has really been clicking this whole semester,” O’Donnell said. “We need to continue our production to help the team.”

This weekend, the team is preparing to play Bowling Green State University. Fogaroli said he is looking forward to the test of playing such a good team.

“We are going to continue to emphasize refinement and developing the boys’ skill,” Fogaroli said. “They have a solid club, but if we show up rested, healed, and ready to work hard, we should come out with a win.”

Bissett said even though they had a hard time with Bowling Green last year he knows they will do well this year.

“Bowling Green will be a good test,” Bissett said. “We are a young team, but our best really does come out against teams we have adversity against.”

At 10 a.m. on Sunday, Feb. 6 NMU will play Michigan Tech in Houghton for the last meeting with their U.P. rival.