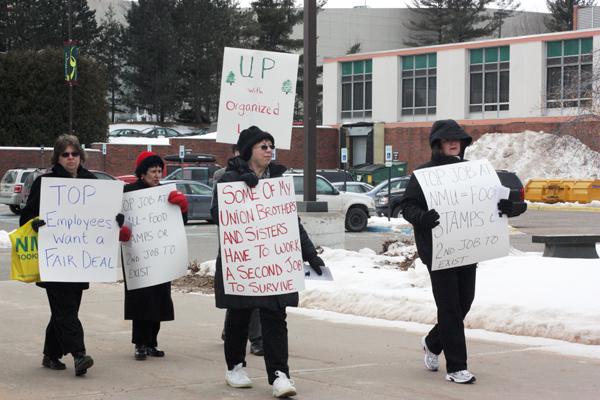 Members and supporters of Northern Michigan University’s UAW Local 1950 picketed in the cold weather Tuesday afternoon outside the University Center.

UAW Technical and Office Professionals’ (TOPS) contract expired on June 30, 2011 and the UAW team has been unable to bargain for a new contract that provides for living wages and affordable health care, a UAW statement said.

The informational picket on Tuesday was intended to get the word out about the union’s problem in coming to equitable contracts agreeable by both the union and administration, said Grace Albert, UAW bargaining team member.

“We hope to get an equitable contract when we meet with administration again to show that our union is strong and we’re working together towards this,”Albert said. “I’m really encouraged (by the participation). I think it’s good.

“We’ve got the union behind us, and I think other union groups on campus are starting to show their support too.”

“(Black Shirt Tuesday) is another thing to call attention to our issue of needing living wages and affordable heath care,” Albert said.

According to a UAW statement, to aid in balancing an operating budget, which reflected a $6 million state appropriations cut, NMU administrators looked at the high cost of health insurance and decided to move to Blue Cross Blue Shield Community Blue 2 plan to save about a third of that amount. The UAW bargaining team is planning on getting together again to see what they can work out, Albert said.

“We’ve requested some financial information from the university,” Albert said. “They’re saying they don’t have any money to give us a raise, so that’s where we’re at.”

UAW represents the lowest paid full-time employees on campus, with starting salaries of about $9 per hour and over $1.15 of that would have to be used to pay the new health insurance premium and the higher deductibles and higher co-pays, said a UAW statement.

The union also said in a statement it believes NMU is fiscally sound and is upset that money was spent to purchase more property and on other expenses, instead of increasing wages for its members.

The university has a team of management representatives that meet with the UAW bargaining team to negotiate terms for a new agreement, said Gavin Leach, vice president of finance and administration. The management bargaining team consults with Leach as needed throughout the process, he said.

“We will continue to work with the UAW 1950 towards a resolution on a new contract as part of the negotiation process,” Leach said. “We are hopeful we can come to a resolution in the near future.