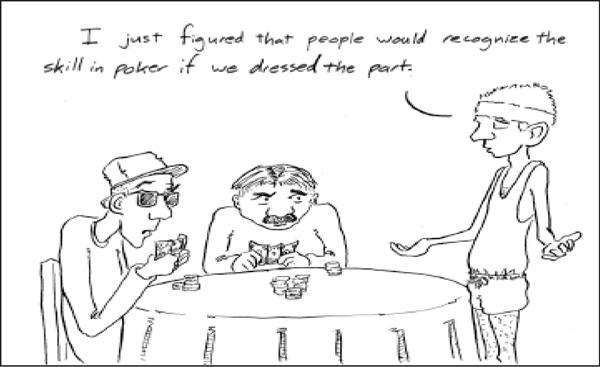 Sitting behind a stack of poker chips at a Madison, Wis. casino playing Texas Hold’em, I found myself holding ace-king unsuited in late betting position.

When it was my turn for a pre-flop bet, I made an average-size raise. The other players folded their hands and two players called my bet.

I already knew at this point that both players had pretty good starting hands, although I wasn’t sure if they were better than my ace-king.

The flop brought a jack, queen and ace, all unsuited. I had gotten top pair on the board along with top kicker. The board made me worry, though, because the other two players had acted strong before the flop.

The first player in position checked, with the second player making a bet about half the size of the pot.

I pondered what to do with my current ace-king. I was worried one of these players had a big pair pre-flop and had now made a set or, even worse, flopped the nut straight. I folded because the first player seemed ready to put all his money into the pot as he leaned in closer to the poker table.

After I folded, the first player called the bet made by the second.

The river card brought another queen, pairing the board. I replayed the hand in my mind, trying to figure out what the other players’ cards were.

I thought the first player had either pocket jacks or aces, while the second player must have had cards to give him a straight or two-pair.

The second player flipped over his cards, exposing a king-10 suited which gave him a straight, realizing he lost the hand on the river card.

Many new poker players would be tempted to stay in the hand I just described with an ace-king, after getting top pair on the flop. They think ace-king is too good a hand to simply fold in this situation. This is incorrect.

A more experienced player would have seen that holding ace-king, with top pair after the flop, was vulnerable to possible set and straight possibilities from two other opponents in the hand. When these players acted aggressively, showing that they had strong hands, the correct move was to fold ace-king and wait for another hand. That’s exactly what I did.

Every hand of poker includes chance, but in the long run, poker winnings are determined by the skill of individual players.

The hand I described demonstrates how poker is not a game of chance or luck.

It is a game that requires an understanding of math, recognizing betting patterns, reading player’s body language and understanding different poker strategies, proving that poker is a game of skill.

Recently, the federal government has been going after U.S. online poker sites for violating the Unlawful Internet Gambling Enforcement Act of 2006.

Under this law, companies can be prosecuted for knowingly accepting payments related to wagers or bets placed on the Internet that is unlawful under any federal or state law.

The problem with this is that many people have been prosecuted under another law, the Federal Wire Act, for online poker. Except this law was meant to apply exclusively to sports betting, not online poker.

With the UIGEA, the federal government is trying to apply the misinterpretation that FWA applies to online poker to arrest company CEOs who decided to allow Americans like myself to play poker. This is a huge misinterpretation of FWA and UIGEA that must be changed soon.

Many legal scholars argue that there is no concrete federal statute criminalizing online poker.

We need to stop making criminals out of innocent people.

The U.S. needs to liberate poker players like myself and let us play the game we love without interference.

Sooner or later, Congress will finally recognize that poker is game of skill and legalize online poker for millions of Americans who love the game.