NMU snaps out of skid with GLIAC sweep

Losing streaks are never easy, and last weekend the NMU women’s basketball snapped theirs in a big way, sweeping a pair of conference games to jump into third place in the GLIAC North.

“Lauren’s two three’s were really big because I was searching for someone to step up and make some plays,” Mattson said. “It ended up in her hands and she made them.”

Mattson said he was impressed with how the offense responded to the Oilers defense. Findlay frequently switched from man to zone and threw presses at the ’Cats.

“I thought we executed extremely well on offense today,” Mattson said. “We got the ball where it needed to go and people made plays. We didn’t run a play today because you can’t run anything against it because their just constantly switching and trying to match up with you.” 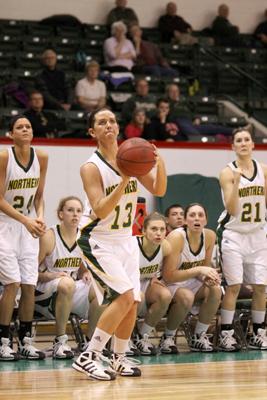 Last Thursday the Wildcats snapped their four-game losing streak with a 70-69 nail-biting win over the Wayne State University Warriors.

NMU overcame a 17-3 deficit to start the game and survived a last-second shot attempt by the Warriors to hold on for the win. Mattson said his team could have played better but he was happy with the effort.

“We dug in and we fought back and we kept grinding all night long,” Mattson said. “Those girls have a lot of heart; they got a lot of guts. They’re never going to give up on Northern Michigan, they play their hearts out for this school.”

Lyons, who led the ’Cats with 25 points and five assists said the victory was a big morale booster for the team heading into the final stretch.

“It was huge, we needed that win to keep our season alive, to get our motivation back, our hopes and dreams back; that was a huge win for us,” Lyons said.

Lyons had some help on the scoring end from freshman center Courtney Lemon who scored 20 points and connected on five of 11 3-pointers. Mattson said her versatility was key in the win.

“She’s a huge weapon out there. She can just flat out shoot the basketball for a 6’3” girl and really stresses the other team’s center out,” Mattson said. “I thought she had a really solid game on both ends.”

On the defensive end, Lemon was matched up with the Warriors junior center and leading scorer Jaunita Cochran. Lemon slowed down the Division I transfer in the second half.

“It feels good to actually stop a big girl like that,” Lemon said. “We all really worked well as a team tonight to get the stops on the defensive end that we needed.”

The game almost slipped away from the ’Cats at the free throw line where they went 16-28 as the Warriors attempted to get back in the game.

Mattson said the lack of practice time in the Berry makes it a challenge.

“It would be nice to get in there and shoot everyone once in a while,” Mattson said. “It’s an adjustment for us; we basically play 27 road games a year.”

“We had eight turnovers, not many teams in the country have eight turnovers at the end of the night,” Mattson said. “We took care of the basketball and got it where it needed to go.”

The ’Cats are back at home this weekend to take on the Lake Superior State University Lakers. Tip off is at 5:30 p.m. Thursday, Feb. 9. NMU is looking to complete the sweep of the Lakers after a 55-36 victory last month.