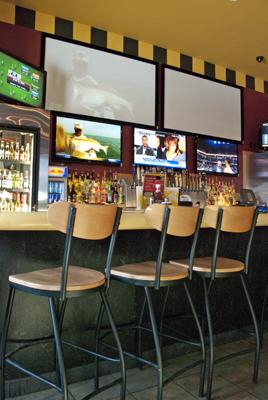 NMU fans will have the chance to cheer on the hockey team at this year’s Wildcat Night Across the Country held at Buffalo Wild Wings in Marquette.

NMU will be playing University of Michigan this weekend and Buffalo Wild Wing’s all over the country will show the game on their many big screen televisions.

At the Buffalo Wild Wings in Marquette, prizes donated by the bookstore along with event T-shirts will be given away throughout the game.

“This is something we have been doing annually for 12 years,” said Deanna Hemmila, director of alumni operations. “This is the largest ever though, by the amount of locations that are participating.”

Some of the Buffalo Wild Wings locations that the game will be played at are Naples, Fla., Atlanta, Chicago, Los Angeles, Detroit and many more.

“It’s going to get the guys going, knowing that the game will be played on national television,” said Kyle Follmer, junior hockey player. “And that a ton of people will be watching it in Marquette.”

The last few years the game has been shown at Vango’s, but the game is being broadcasted on Fox Sports Detroit Plus and they do not receive that channel.

“We are expecting a good turnout,” said Alex Grignon, manager at Buffalo Wild Wings. “There is always a good crowd when Northern plays, especially against an in-state team.”

The alumni association will be hosting the event and board members will be present.

“It’s a really good way for alumni and community to get together,” Hemmila said. “A great informal way folks can get together and cheer on the Wildcats.”

There is no cost for the event; however food and drinks will be available for purchase. The puck drops at 5 p.m. and the party will run long into the night.

The team has four games left in the regular season and then they will play in post season tournaments. NMU is tied for seventh with Miami University and Notre Dame University in the CCHA and are ranked 19th nationally.

University of Michigan is rank third in the CCHA and fifth nationally. This will be the Wildcats second series against U of M. Last time they met, they split the series.