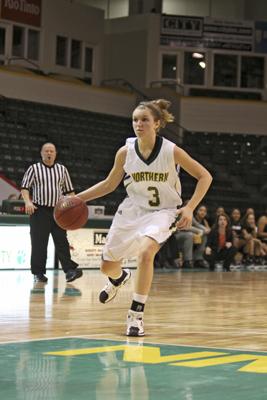 The ’Cats had a chance to gain ground in the GLIAC standings but were unable to overcome a slow start and lost 74-69 to the Lake Superior State University Lakers.

Northern (6-9 GLIAC, 10-12 overall) fell behind by 25 points with 13:18 left in the second half. With a barrage of 3-pointers and an aggressive full-court press, the ’Cats mounted a comeback and cut the Lakers lead to four with 2:28 left.

The Wildcat surge started too late as the Lakers hit their free-throws down the stretch to seal the win. Head coach Troy Mattson said the team has to sustain that high energy from the tip.

“We have to fight from the time the ball goes up at the start of the game because there was no fight in us at the beginning of the game and we didn’t do much for 30 minutes,” Mattson said.

NMU got off to a slow shooting start while the Lakers raced out to 50 percent shooting in the first half, to build a 34-23 lead. Head coach Troy Mattson said missed opportunities hurt the team.

The ’Cats shot 9-36 from three-point-range against the Lake State zone. The Lakers were able to connect on 10-15 from deep. Though the offense struggled Mattson said the game was lost on the defensive side.

“We’re not defending hard enough,” Mattson said. “I told our team that. We haven’t defended hard for a month. We’re going to have to make some adjustments there.”

A win would have helped the ’Cats distance themselves in the GLIAC tournament race. Northern currently has the eight and final spot but sits only a game ahead of Wayne State and Grand Valley. Freshman guard Alyssa Colla said the team underestimated the Lakers.

“We weren’t ready to play against Lake State,” Colla said. “We beat them by quite a bit last time and I think we just sort of looked past that game and thought of it as a win before we even played. I think the loss will definitely motivate us in these upcoming games.”

Last time the two teams met NMU bounced the Lakers, 55-36. It was the second lowest score NMU has held an opponent to all season. Since that game, the ’Cats opponents have scored 60 or more points in six of seven games.

“We’ve been trying to outscore people,” Mattson said. “There’s not enough commitment on our part to stop people.”

The intensity picked up late for the Wildcats and they scored 14 points off turnovers in the second half. Mattson said he liked the effort at the end but sustaining it for a game is the goal.

“I’ll give the girls credit for the last 10 minutes, playing really really hard, but the first 30 minutes was not our basketball team out there,” Mattson said. “They know better then to play at that level, so we’ll try to get it corrected.”

NMU is back on the road this week as they travel to Ohio to take on a pair of GLIAC South opponents. The ’Cats take on Lake Erie at 6 p.m. Thursday, Feb. 16.

Then they play Ashland at 1 p.m. Saturday, Feb. 16. Mattson said this weekend will be a test for the team.

“Can we bounce back? Sure, we can bounce back and get a win on the road but it’s going to be a tough task,” Mattson said. “They have a good basketball team over there, so we’ll see if we step back or if we can move forward from our effort on Thursday.”