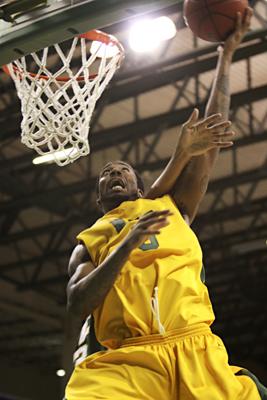 Second half struggles have plagued the NMU men’s basketball team this season. Last Thursday was another case of this as the ’Cats let a first-half lead slip away and lost to the Lake Superior State University Lakers, 68-64.

The ’Cats (4-11 GLIAC, 8-14 overall) went into the half leading 37-28. Like their game before against Findlay they were unable to close out the contest. Head coach Doug Lewis said the team needs players to find the next gear in the second half.

“Same soup reheated, that’s what it is,” Lewis said. “We just reheated some food that we had yesterday. We played that game, play well the first half, guarded and played good defensively. Second half the game got tight, you know pressure busts pipes and real players got to step up to the plate.”

Despite shooting 37.3 percent for the game, Lewis said the defense and battle of the boards is where the team is losing the game.

The Lakers (6-10 GLIAC, 11-12 overall) outshot the Wildcats percentage wise in the first half but NMU went 12-14 from the charity strip to pad their lead. The ’Cats went up by as much as 12 in the half.

Northern shot 40.7 percent in the first half but saw their numbers drop in the second half, including free-throw attempts. Lewis said they have to focus on getting stops.

“We shot 34 percent from the field, but more importantly if you’re going to shoot 34 percent you can’t let them shoot 60, so that’s the issue,” Lewis said.

A minute into the second half, NMU matched their biggest lead of the game at 12 after a free-throw from freshman guard Quinton Calloway. The ’Cats were then held scoreless for the next four minutes as Lake State climbed back into the game.

“It’s all about seeing the light at the end of the tunnel and you have to dig,” Lewis said. “That means picking up you’re intensity, knowing that the prize is the win at the end of the game. Until we understand that part this is what’s going to happen.”

Senior forward DeAndre Taylor snapped the scoring drought with a lay-up at 14:18, but less then a minute later Lake State took the lead and held it for the remainder of the game.

On the scoring end the ’Cats were lead by Taylor’s 16 points on 7-14 shooting. Freshman guard Haki Stampley also netted 16 points.

Senior center Jared Benson who also chipped in eight points and a team-high nine rebounds, said the key to snapping the losing streak is defense.

“We have to stay together as a team,” Benson said. “We have to glue together on defense because if there is any one weak link on our defense everything is going to fall apart, so we have to get everybody on the same page.”

The Wildcats are on the road this week as they travel to Ohio to battle a pair of GLIAC South opponents. The first game of the week is against the Lake Erie College Storm at 8 p.m. Thursday, Feb. 16. Then they play the Ashland University Eagles at 3 p.m. Saturday, Feb. 18.