WinterFest goes on despite weather 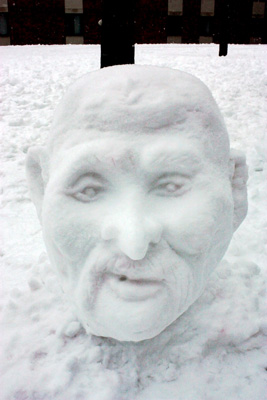 NMU students, faculty and staff have the opportunity to create snow sculptures on campus until the Special Events Committee judges them from 10 a.m. to 2 p.m. on Friday, Feb. 24. On Sunday, the Human Sled Dog Races will take place at the Payne-Halverson field at 1 p.m.

While the Human Sled Dog Races have proven to be a successful WinterFest event in the past, the Snow Sculpture Competition is a new addition to this year’s activity lineup. According to special events coordinator Sarah Muellerleile, there are currently seven teams signed up to participate.

“With it being the first year of this competition, I am happy with that amount,” Muellerleile said.

Participants will be judged on various criteria established by the committee.

“We are looking for original ideas and creative use of materials,” Muellerleile said. “Also, we want to see that the winning sculpture took the team some time and effort to build.”

Due to the warm weather and lack of snow, the winning team will not earn points toward their overall WinterFest score, Muellerleile said.

“We’ve decided that the winners will get a gift card to Aubree’s Pizza and each team member for up to six people will receive a WinterFest shirt and mug instead,” Muellerleile said. “I’m a little afraid of the warm weather but I think students will be creative and come up with some awesome sculptures.”

However, some snow sculptors are daunted by the weather conditions. Nina Lehto, a sophomore art education major, said she was planning to participate in the sculpture contest until the snow began to disappear.

“I like to have good packing snow, not this stuff that’s melted and then refrozen,” Lehto said. “I don’t think I could do anything I would be proud of, but I hope the people who are sticking with it are able to come up with something cool.”

Another snow-oriented event, the Human Sled Dog races, will take place later on this week. There are currently 13 teams signed up to participate in the races, according to Muellerleile.

In this activity, contestants ride in a homemade sled while other team members pull the sled through an obstacle course. The ultimate goal is to see which team will cross the finish line first.

WinterFest points will be awarded to the winning team and will count toward their overall score. Other prizes will be handed out as well, such as WinterFest shirts and mugs.

“There is also an award for the most creative sled,” Muellerleile said. “Many different materials have been used before, depending if you want to go fast or not.

“I have seen everything from cardboard and plastic to something as crazy as a shopping cart.”

Teams are encouraged to be as creative as they would like.