Lyons comes up in the clutch 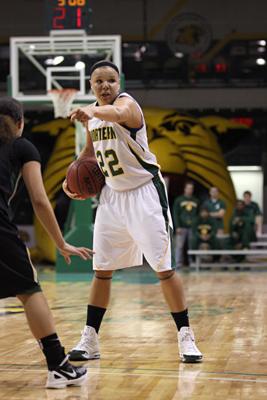 The Wildcats post season aspirations came down to the final 12 seconds of their game last Thursday.

With the score deadlocked at 57-57, senior guard Chelsea Lyons drove the ball and netted the game’s final hoop for a 59-57 victory over the Lake Erie College Storm.

“We just cleared the side out and let her go,” said head coach Troy Mattson. “The shot clock was not in our favor. She just made an incredible shot over two people.”

Lake Erie had a shot attempt in the final seconds that came up short. Mattson said it was a confidence boost for his team to beat the Storm; who are ranked place in the GLIAC South.

“It was a big win for us,” Mattson said. “We went out on the road and got out to a great start and made them adjust to what we were trying to do and we played great in the final four or five minutes.”

The ’Cats trailed for a five-minute stretch in the second half when senior guard Hillary Bowling hit a 3-pointer with 4:23 left to put NMU up by two. The Wildcats never relinquished the lead from that point. Bowling leads the team in 3-pointers made with 37.

On the defensive end, the ’Cats were able to limit Lake Erie to only five 3-point attempts and 29.4 percent shooting from the field.

The Storm are the second highest scoring team in the conference and hold the third best 3-point percentage. Freshman center Courtney Lemon said the defensive effort was crucial.

“We really worked on not letting them get three’s up,” Lemon said. “That’s a huge part of their game. The fact that we stopped that really helped out.”

On Saturday, NMU faced off with No. 5 ranked Ashland University Eagles. The ’Cats dropped the road match, 85-55.

“On Senior Day, on their home court, they really gave it to us,” Mattson said. “They have five great players, as good as anybody has seen in this league in many years.”

NMU was held to 20.9 percent shooting in the first half as Ashland built an 18 point lead heading into the locker room. Despite a better shooting second half NMU wasn’t able to get back into the game.

“Ashland’s a top five team in the country and they’re all of that,” Mattson said. “It was a tough matchup for us and they showed it all night long.”

The Wildcats were paced by Lyons 18 points. Senior forward Staci Beckel chipped in another 12 points off the bench.

The split keeps NMU in the eight and final spot for the GLIAC tournament heading into their final weekend of play.

With two wins they could potentially move into the seventh slot. Mattson said the team’s fate is in their hands.

“We control our own destiny,” Mattson said. “The chance to play in the tournament and play someone again would be a big confidence boost and a chance to send Hillary, Chelsea and Staci out on a positive note.”

The ’Cats first game of the weekend is at 5:30 p.m. Thursday, February 23 as they host the Northwood University Timberwolves.

NMU dropped their first game to Northwood, 63-55. Lemon said the team wants to finish on a high note.
“This weekend is huge, if we win these two games we get into the tournament which is what we all want,” Lemon said. “We want to play for our seniors, we want to play for our team, we just really want to get two wins that we need.”