NMU plays for pride after another loss 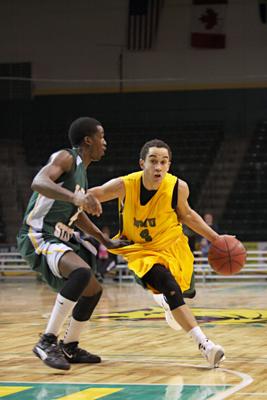 A second half comeback fell short on Saturday as the ’Cats (4-13 GLIAC, 8-16 overall) lost, 87-79, to the Ashland University Eagles, extending their losing streak to eight games.

“What’s more encouraging than anything is that our guys are still playing hard,” Lewis said. “Eight games, you look at it and say ‘man that’s bad,’ but at the same time were trying to learn how to win with a lot of young guys and experience is only going to help us in the future.”

Foul trouble plagued the ’Cats all game, who were all ready running with a short bench due to an ankle injury to sophomore forward Matt Craggs and suspensions of senior center Rashano McRae and sophomore guard Curtis Pettit.

Senior center Jared Benson picked up his third and fourth fouls early in the second half forcing senior forward DeAndre Taylor into the center spot. Benson said it was an adjustment for the defense.

“I got in foul trouble and we had to move DeAndre down to the five,” Benson said. “He hasn’t played that spot yet, so everybody is rotated into a new position and it kind of threw us off for a few minutes.”

Benson and Taylor both eventually fouled out and freshman guards Haki Stampley and Quinten Calloway had four apiece.

Despite the whistles, the ’Cats were able to cut the Eagles lead from 13 to three with 1:42 left.

“Our guys just fought,” Lewis said. “As a coach all you can ask is that they give their best and that’s what they did on this weekend road trip, is give me their best.”

The ’Cats showed some positive signs going forward as they only committed five turnovers as a team. Lewis said it was a big step for his young backcourt.

“We always make mistakes when we’re tired,” Lewis said. “In the Ashland game, they really showed some signs of growth, when they got tired they pretty much sucked it up and played harder.”

On Thursday the ’Cats took on the Lake Erie Storm and lost 74-62 after they were unable to maintain their halftime lead.

NMU committed 19 turnovers, which resulted in 20 points for Lake Erie. Lewis said he liked the fight his team showed but that the giveaways hurt his squad.

“That’s what we talk to our guys about, mental toughness,” Lewis said. “The Lake Erie game, I thought we got a little tired at the end and you know our freshman made a couple of key turnovers that turned into points for Lake Erie.”

A pair of free throws by Benson at 5:30 cut the Eagles lead to three. It never got any closer then that as they held on for the win.

NMU was lead by Stampley’s 16 points. Taylor chipped in another 13 points and seven rebounds, while Benson contributed 11 points.

The Wildcats play their final two games of the season this weekend. Benson is nearing his 1,000th career point and it’s Senior Day on Saturday.

Lewis said the team wants to build momentum heading into next season.

“The most important thing is that we want to win these two ball games this week,” Lewis said. “It’s going to be the way we win. If we have effort, play defense and rebound the basketball, it’s going to be a great sign for the future of Northern Michigan basketball.”

The ’Cats tip off at 7:30 p.m. Thursday, February 23 against the Northwood University Timberwolves. Then at 1 p.m. Saturday, February 25, they face the Saginaw Valley State Cardinals. Both games are at the Berry Events Center.